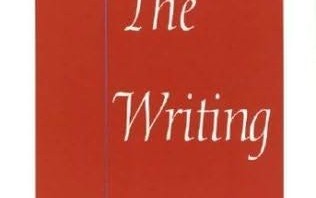 One of my favorite books about writing is David Huddle’s wonderful collection of essays, The Writing Habit.  If you’re a writer and you don’t know this book, you might want to get it.  Since it came out in 1994, you can get a used copy via Amazon real cheap.  You will find much food for thought in it.

Huddle taught writing for 38 years at the University of Vermont, and has published 17 books of fiction, poetry, and essays.  He has a new novel out this fall called Nothing Can Make Me Do This.  Reading these pieces is like an intimate conversation with an experienced, kind, modest, accomplished writer/teacher who wants to help you.

The first essay is called “The Writing Habit,” and deals with how to get writing done.  Huddle starts by saying the “major difficulty a writer must face has nothing to do with language: it is finding or making the circumstances that make writing possible.  The first project for a writer is that of constructing a writing life.”  He discusses the writing habits of several writers, and tells about his own over the years.  He’s my guy when he says “I’m convinced that naps are an essential part of a writing life, that they ‘clean’ the brain by discharging the clutter and allowing the subconscious to address some of the central issues of the morning’s writing.  If I know I want to do some writing in the afternoon, I’ll always try to schedule that session immediately after a nap.”  Now I can justify the many naps I take.  I’m cleaning my brain.

Other rich pieces in The Writing Habit include “Memory’s Power,” “Story-Truth,” “Issues of Character,” “Let’s Say you Wrote Badly,” “On Restraint,” and “What You Get for Good Writing.”  But the essay I want to talk about today is called “Puttering in the Prose Garden: Prose Improvements for Fiction-Writers.”  I found it interesting to see how he describes the characteristics of four prose styles and I thought you might too.

The first is “Basic Prose,” in which he says the writer can use language in a correct and acceptable manner.  It requires correctness, in a usage sense, but it has “no particular connection to subject matter.  As we go up the evolutionary scale in categories of prose, we find that the relationship between language and subject matter deepens, intensifies.” Interestingly, I just finished reading Jaycee Dugard’s memoir A Stolen Life, which I will post about when I get my thoughts together on it.  Understandably perhaps, she writes a very basic prose: “Initially I assumed that I would be going home with my mom once we were released.  I didn’t know what to think of this prospect.  Honestly, I was doing what I had always done and was just going with the flow.”  But the story itself, of being kidnapped at age 11 and living in secrecy and isolation under the domination of her captor for the next eighteen years, is amazing and powerful, and the almost childlike quality of the language seems a perfect expression of such a stultifying, stunting existence.  Here, basic prose works.

“Basic prose” did make me think of writing I have seen from developing writers that consists mainly of short, simple sentences.  I find it in myself when I don’t know what I want to say, or, in fiction, when the characters are simple souls.  More complex sentences lead to more complex, nuanced thought and add more depth and texture, more density to the writing.  One can consciously develop one’s voice and style (whatever those are) by working on sentence structure.  Actually modeling elaborate, amplified, extended, intricate sentences which force one into saying more and then even more can be a useful exercise.

Take these sentences, for an experiment, and write the same sentence structure, only with your own material:

“Dark hair and lots of it, heavy brows, sharp features, dark eyes, dark circles under the eyes, dark looks about the room, at the maitre d’, the waitress, the trolley laden with rich, tempting desserts, and finally, as Toby guides her to the table, at Chloe, who holds out her hand and says pleasantly, though she is experiencing the first tentative pricks of the panic that will consume her nights and disrupt her days for some time to come, “Salome, how good to meet you.”  From Trespass, by Valerie Martin.  Wow, a lot gets packed into THAT sentence!

Or try this one, easier.  “About a year after they had rented the farmhouse with loose brown aluminum siding on Whitefeather Road, Saul began glaring out the west window after dinner into the unappeasable darkness that pressed against the glass, as if he were angry at the flat uncultivated farmland for being farmland instead of glass and cement.”  A requirement of this one should be to use the word “unappeasable” in your sentence!  From Saul and Patsy, by Charles Baxter.  You can do this experiment with your own sentence choices.  It can be quite interesting to see how modeling another writer’s sentences draws or forces MORE out of you.

Huddle’s next category is “Window-Pane Prose.”  “Here language is utterly fundamental.  Language is on the page only for the purpose of allowing the reader access to the experience of the fiction.  This language is modest.  It may be graceful language, but it never calls attention to itself.  It stays out of the way.”  This prose can be wonderful, with concrete, sensory details and stories that engage you directly in the situation and characters.  “Window-Pane Prose writers depend on the human drama to carry their stories; their discipline is a particularly saintly one: they must be so fluid, deft, and precise that no one notices their work, the making of the sentences through which the reader ‘sees’ the story.”  I love the idea that we look right through this kind of prose, like a window-pane, to reality itself.

“The campus security guard found her. She wore a parka and she lay on the foot-bridge over the pond.  Her left cheek lay on the frozen snow.  The college was a small one, he was the only guard on duty, and in winter he made his rounds in the car.  But partly because he was sleepy in the heated car, and mostly because he wanted to get out of the car and walk in the cold dry air, wanted a pleasurable solitude within the imposed solitude of his job, he had gone to the bridge.”  From Andre Dubus’ “Townies” in Finding a Girl in America

Next up is “Personable Prose,” “language with definite personality, and that personality becomes a part—usually a somewhat small part—of the story.  Sometimes we think of the personality of the prose as the ‘voice’ of the author…

According to Huddle, with Personable Prose, the relationship between the reader and the story is a more intimate one.  Here we pay attention not only to the story but to the way it is being written; the sentences are of interest and pleasure in addition to the content they convey.  There’s a definite voice to the writing, as opposed to the personality being effaced as in Window-Pane Prose.

Lots of stories are written in what he calls Personable Prose.  It’s something we strive for, to give the material a voice that will seduce and beguile the reader.  When I quoted the opening of Tom McNeal’s To Be Sung Underwater (blog post on Sept. 27th), I was responding to the voice of the omniscient narrator, to prose that had personality and originality and that called attention to itself as writing.

Then there’s “Mega-Prose,” which I’m sure we can all recognize, with its “heightened language, language of greater density and energy, more pronounced rhythmic qualities, richer textures of sound.  Mega-Prose aims for intensity.  Mega-Prose, like Personable Prose, reflects personality, but in this case personality has been souped up.  The quality of mind it reflects is quickness, allusiveness, quirkiness, liveliness in general.”  The example above, from Trepass, might be mega-prose, or further along the continuum than a lot of prose that isn’t trying so hard.

Here’s one of the examples Huddle gives of “Mega-prose:”

“Talmudic scholar, master of cabala, Isaac felt vulnerable to a thousand misfortunes in New York, slipped on an icy street, lay on his back and wouldn’t reach for his hat. People walked, traffic screamed, freezing damp sucked through his clothes.  He let his eyes fall shut—no hat, no freezing, no slip, no street, no New York, no Isaac—and got a knock against the soles of his shoes.  It shook his teeth.  His eyes flashed open, darkness spread above him like a predatory tree, a dozen buttons glared and a sentence flew out, beak and claws, with a quality of moral sophistication indistinguishable from hatred: ‘What’s-a-matta, fuckhead, too much vino?’”  from “Isaac” by Leonard Michaels, in Going Places

Huddle doesn’t mean to suggest that all story-writers try to work their way up to becoming Mega-Prose Writers.  “I don’t think the world is ready for a stampede of Mega-Prosers.”  But he does say if Basic Prose is the only kind one can write, there is room for improvement!  “If I’m a Basic Prose writer, then I should try writing Window-Pane Prose and/or Personable.  In both these latter categories, I’m required to give myself over to the story, as opposed to making the story submit to the one kind of prose I can write.  And this ‘giving oneself over’ to the material is one of the big secrets, it seems to me, of writing good stories.”

Easy to say, hard to understand.  And do.

Coincidentally, since I just posted about her, he cites Eudora Welty as an example of a writer who was able to employ different qualities of style and language depending on the needs of a particular story: “In ‘Powerhouse,’ she’s writing Mega-Prose, in “Why I live at the P.O.,” she writing Personable Prose, and in “A Worn Path,” she using a wonderfully clean Window-Pane Prose.  Because she can handle various kinds of prose, she can handle various kinds of material.”

So what is the point of all this?  Why know what Huddle considers four prose categories?

I think it’s to show us possibilities.  To make us aware that the way we write now is not the only prose style—there are many varieties in the prose garden, from basic to mega and lots in between–and to make us more sensitive to expanding our repertoires of writing styles.  Different narratives require different things from us.  If we’re stuck on a story, we may try approaching it differently in terms of a prose style.

Huddle says “So much of the luck of writing depends on uncontrollable forces that even the most arrogant of writers are humble in the face of the work to be done.  Style, in that it is, in the deepest sense, personality, comes out of these uncontrollable forces.”  One of the many challenges of writing is finding more and more ways to be one’s true self, be it in fiction or autobiography.  And perversely perhaps, sometimes the way to do that is by studying and even trying on what other writers have done well.