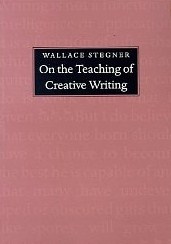 In a comment on my recent post called “Shape in Writing,” Chris Roberts writes that he “is amused when writers try to ‘teach’ writing.  The best writing is done intuitively, absent constructs and dictates.”

As I pondered Chris’s intriguing thoughts, they brought to mind a little book called On the Teaching of Creative Writing, a series of questions posed to Wallace Stegner, who was one of my writing professors at Stanford, along with his responses.  I hadn’t intended to post anything again about Mr. Stegner, having just written about him on a recent post (July 6), but the idea of bringing in a Higher Authority who could speak much more eloquently than I to the matter appealed to me.  When I took down the book, which I hadn’t looked at in years, and read what he had to say, I decided others might find his thoughts as wise and generous as I did.

I am selecting and severely editing the questions and his replies for the sake of blog brevity (not my strong suit, apparently).  You will find a lot more on the subject in this 72 page mini-book.

What, Mr. Stegner, is your reply to the question of whether creative writing can, in point of fact, be “taught”? –

W.S. “That question has been coming at me, as you can imagine, for a long time, because I taught writing for something like forty-four years, before retiring…

“Within the academy, of course, there are limited things that a teacher can do, apart from encouraging the environment of interest and criticism within which writing can take place.  How can anyone ‘teach’ writing, when he himself, as a writer, is never sure what he is doing?

“Every book that anyone sets out on is a voyage of discovery that may discover nothing.  Any voyager may be lost at sea, like John Cabot.  Nobody can teach the geography of the undiscovered.  All he can do is encourage the will to explore, plus impress upon the inexperienced a few of the dos and don’ts of voyaging.

“A teacher who has been on those seas can teach certain things—equivalents of the use of compass and sextant: the language and its uses, and certain tested literary tools and techniques and strategies and stances and ways of getting at the narrative essence of a story or novel or the dramatic force of a play or the memorableness of a poetically honed thought.

“Any teacher can discourage bad (meaning, unproductive or ineffective) habits and encourage those that work.  He can lead a young talent to do what it is most capable of doing, and save it from some frustrating misdirections.  He can communicate the necessary truth that good writing is an end in itself, that an honest writer is a member of a worthy guild.  That may be the most important function of the teacher of writing.”

Is it the case that everybody can be taught to be a creative writer?  And should everyone be?—

W.S.  “No, on both counts.  I have always tried to keep in mind Ring Lardner’s remark that you can’t make a writer out of a born druggist.  You can’t make a sprinter out of a 250-pound hammer-thrower or a musician out of someone who is tone deaf.  You begin with a gift, big or little, and you try to help it become whatever its potential permits.

“It is a fact that many people don’t know their own potential, and without help will never have a glimmer of what it might be.  It is a sadder fact that some misread their potential and aspire to be something which their gifts simply don’t allow them to become.

“Writing is not a function of intelligence or application.  It is a function of gift—that which is given and not acquired.  All any teacher can do is work with what is given.

“But I do believe that everyone born should have a chance to become the best he is capable of and that many have undeveloped or obscured gifts that, like spores, will grow if they are given water.”

What does one look for in trying to determine whether an individual has any real potentiality as a creative writer?—

W.S.  “…  Ultimately, what one looks for is sensibility—which need not be as effete as it sounds—and sensibility is essentially senses.  One looks for evidence that eyes and ears are acute and active, and that there is some capacity to find words for conveying what the senses perceive and what sense perceptions do to the mind that perceives them.

“What one looks for in language is not mechanical perfection of syntax.  What one looks for is accuracy, rightness, vividness.  And beyond that, of course, some notion, however rudimentary, of the seriousness of good writing, some sense that literature should enhance life.”

That’s as good a note as any to end on.

Thank you, Chris, for raising the issue and taking me back to these thoughts.  And thanks to others of you who weighed in with your comments and experience on “Shape in Writing.”  May we all learn from each other and may we all find our own ways! 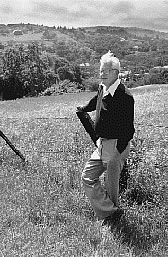