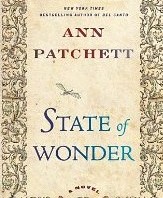 Ann Patchett’s STATE OF WONDER Not So Wonderful

State of Wonder, the new novel by Ann Patchett, is not so wonderful.

I had wanted to love it and I expected to love it. I had truly loved Bel Canto, her beautiful, amazing novel about a group of terrorists who take hostage international guests at a birthday party in South America. Over the course of the siege the terrorists and hostages forge relationships of friendship and love, and if that sounds unlikely, so be it.  It was for me a spell-binding novel of beauty, compassion, and passion, written with a masterful third person omniscient narrator.  I also read Truth and Beauty, her memoir about her friendship with Lucy Grealy, who herself wrote an amazing memoir called Autobiography of a Face. In all honesty, I can remember almost nothing about Truth and Beauty, which says more about my memory than the work itself. But based on Bel Canto, I was extremely primed for State of Wonder.

In a nutshell (although it needs to be a big nut—coconut? –to contain this plot), the novel involves an expedition into the Brazilian jungle by Dr. Marina Singh, a research scientist based in a Minnesota pharmaceutical company, to find out about the mysterious death of her friend and fellow research partner who himself had preceded Marina to investigate Dr. Swenson, a 73-year-old scientist who had been Marina’s intimidating professor at Johns Hopkins, and who has been working for years on a potential new drug that would extend women’s fertility into infinity, apparently.  Dr. Swenson, though funded by the Minnesota pharmaceutical company, doesn’t communicate any information about her research or results. Thus Marina is sent in an official capacity to gather information on the progress of the drug, as well as a personal one at the behest of her colleague’s grief stricken wife.

Reading the book, I could see the promised land. The writing is quite – well, what is the word I want to use here? Professional comes to mind, which doesn’t sound exactly like a compliment when I mean it to be. It’s really well written, she’s really a pro, and I definitely admire that. But what was keeping me from getting to the promised land — from loving this book, from relishing it and wanting to return to it at any available moment– was a huge bolder in the road I couldn’t get around: a preposterous plot. Preposterous! Many novels call for the suspension of disbelief to varying degrees;  I’ve posted blogs on the subjectivity of readers’ reaction (Oct. 26 and Nov. 1, 2010), so I get it. But really, I mean, come on! We’re asked to believe that in this day and age a pharmaceutical company is funding research on an indigenous tribe of people deep in the jungle who eat bark off of living trees and have babies as long as they live! Not only that, the company knows nothing about the work, tolerating Dr. Swenson, an employee who for years refuses to provide any information to the company, including her whereabouts.  In a novel that purported to be realistic, it truly strained believability to the breaking point for me.

As for the characters, I found Dr. Swenson one dimensional, always so much in character as the sharp-tongued, take no prisoners, battle ax that it became tiresome.   And I never felt very invested in Marina, who seems more a vehicle than a fully developed character.  There are fine descriptions of the jungle experience throughout, which make up for some of the aggravation.  Here, for example, is a description of a storm in the jungle:

“To the west she could see the storm heading up the river and feel the sudden shift in the texture of the air.  Dr. Nkomo put his hand against her back. ‘Now, please,’ he said and they began to walk quickly in a direction Marina had not been in before.  Birds came reeling past the water and dived straight into the canopy overhead while other things, things that Marina couldn’t make out exactly, darted up trees.  Then there was a single, nuclear flash of lightning that was followed some milliseconds later by a clap of thunder that could have cracked the world in half, and then, because these things come in threes, there was rain.  Marina, half blinded by the light and deafened by the boom, suddenly thought she would drown standing up.”

Why did I read on? Because I had bought the hardback copy…  And okay, I admit I wanted to see what would happen.  The book is fiercely and I gotta say brilliantly plotted once it kicks into gear, which takes a while.  But it gathers momentum until, alas, you can’t put it down, even if you have a scowl on your face because of the ridiculous plot that you’ve been sucked into.  I have to tell you straight up that it has one of the most heartrending endings that I can remember in a long time.  Truly, it pulled at my heart strings so hard I thought my heart would come unraveled.  I suspect the ending will stay with me for a long time, maybe forever.

And that is no small accomplishment.

(P.S.  Now it occurs to me, a day or two later, to ask if people have contemporary novels they can recommend to me.  Of course you may be afraid to, seeing how prickly I was about State of Wonder…)