A friend and I were talking about hyperbole in book blurbs and reviews the other day (I confess I don’t mind a little hyperbole concerning my books).  He told me about Rich Bass’s blurb on the back cover of Cold Mountain when it came out: “It seems possible to never want to read another book, so wonderful is this one.”

I’m not willing to go that far. But after Donna Tartt’s The Goldfinch, I suspect it will be a long time before I read another novel that is as brilliant and beautiful as this one.

The Goldfinch is huge in many ways. For starters, it’s long: 771 pages. So if you’re not up for the long haul, step aside

In addition, it’s “wordy.” Full of fulsome descriptions. If you like a clean, simple, cut-to-the-chase style, Finch is not for you.

If you’re not that interested in highly elaborate (but accessible) discussions of art, furniture restoration, what it feels like to be high or in love, to be terrorized, to be saved, to be lost, to be found, to be good, to be bad, to be human–go elsewhere.

But if you want to have a reading experience that may make you wonder if you’ll ever want to read another novel, I recommend The Goldfinch.

Why is it so great?  You’re entitled to ask.

Let me count the ways.

I give it the highest marks—over the top—for its brilliant characterization; its brilliant sense of place (Manhattan, Las Vegas, Amsterdam); its brilliant plot (quite Dickensian, with one damn thing right after another!); its brilliant description. Most of all the brilliant mind that conceived of and executed this book. How can one person know so much? Brilliant, brilliant, brilliant. I can’t begin to capture its brilliance here (not being brilliant myself).  Let me just say that this was a book where I wished I could quote every line for you.  Ever single line of 771 pages, and you wouldn’t be disappointed by a single one.

Here’s what’s at the heart of this big book: a small painting, “the smallest in the exhibition, and the simplest: a yellow finch, against a plain, pale ground, chained to a perch by its twig of an ankle.” 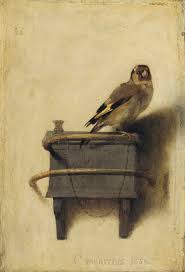 Theo, the book’s extraordinary narrator, rescues this painting, a 17th century Dutch masterpiece, from the destruction caused by a terrorist bomb in the Metropolitan Museum of Art that kills his mother and nearly him when he’s thirteen. Follow this painting all through the novel. It will animate the highly suspenseful plot, but beyond that, it is the overarching vehicle for all this ambitious book takes on: love, loss, longing, obsession, friendship, and the power of art itself. In the process, The Goldfinch contains some of the most vividly detailed writing and richly drawn characters and relationships you’ll encounter in contemporary literature.

Let me introduce you to some of the memorable players:

There’s Andy, who becomes Theo’s best friend in grade school when they both skip ahead a grade because of high test scores: ” . . .poor Andy had always been a chronically picked-upon kid: scrawny, twitchy, lactose-intolerant, with skin so pale it was almost transparent, and a penchant for throwing out words like ‘noxious’ and ‘chthonic’ in casual conversation.”

There’s Boris, the irrepressible, survival-savyy Ukrainian waif who befriends Theo when they’re schoolboys in Las Vegas, and who reappears to play a crucial role in Theo’s adult life in New York. “Boris . . . Long-haired, narrow-chested, weedy and thin, he was Yul Brynner’s exact opposite in most respects and yet there was also an odd familial resemblance: they had the same sly, watchful quality, amused and a bit cruel, something Mongol or Tartar in the slant of the eyes.”

There’s Hobie, a loveable, dreamy, old-world, artisanal furniture restorer who takes in the lost Theo and nurtures him, teaches him, and loves him. “Though I [Theo] sometimes worked down in the basement with Hobie for six or seven hours at a time, barely a word spoken, I never felt lonely in the beam of his attention: that an adult not my mother could be so sympathetic and attuned, so fully there, astonished me.”

There’s Pippa, the unrequited love of Theo’s life:  ” . . .—we’d been there [at a restaurant] for hours, laughing over little things but being serious too, very grave, she being both generous and receptive (this was another thing about her; she listened, her attention was dazzling–I never had the feeling that other people listened to me half as closely; I felt like a different person in her company, a better one, could say things to her I couldn’t say to anyone else, certainly not Kitsey [Theo’s fiancé], who had a brittle way of deflating serious comments by making a joke, or switching to another topic, or interrupting, or sometimes just pretending not to hear), and it was utter delight to be with her, I loved her every minute of every day, heart and mind and soul and all of it, and it was getting late and I wanted the place never to close, never.”

There are plenty of others you have to meet—Theo’s mother, his father, Mr. and Mrs.  Barbour, Zandra, Kitsey, Horst . . .

But most of all, there’s Theo Decker, the protagonist, whom we follow from age thirteen into his mid-twenties. Here toward the end of the novel is Theo reflecting on life:

. . . I’m hoping there’s some larger truth about suffering here, or at least my understanding of it–although I’ve come to realize that the only truths that matter to me are the ones I don’t, and can’t understand. What’s mysterious, ambiguous, inexplicable. What doesn’t fit into a story, what doesn’t have a story. Glint of brightness on a barely-there chain. Patch of sunlight on a yellow wall. The loneliness that separates every living creature from every other living creature. Sorrow inseparable from joy . . .

It’s Theo’s incredibly intelligent, perceptive, sensitive, damaged consciousness that pervades the novel and makes it the brilliant book it is.  We live through so much life, death, trauma, danger, disruption, obsession and passion with Theo that there’s the possibility of being wrung out emotionally. But for readers who give themselves over to Theo and embrace him and his story fully (as I did), you won’t be disappointed. If you’re like me, you’ll want to start reading it all over again.

Not many novels come along that are this exceptional.

And that’s not hyperbole.