Darin Strauss’s Memoir Half a Life: What Did He Owe the Zilkes? 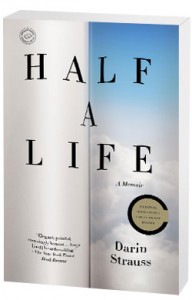 This week in the online memoir course I’m teaching, the students are working on characterization, both their own and that of others. We’re reading a chapter in Writing the Memoir by Judith Barrington called “Writing about Living People,” in which she talks about how writers must come to their own decisions about their responsibilities to those whose lives are entwined with their own, and how one must balance the reasons for writing a story using real names against the harm that might be done to someone else.  I had thought this matter of what we owe people we write about was settled in my mind. I always counseled and taught that when writing about other people, one must try to arrive at the largest understanding and perspective, and while I didn’t think that was always easy, it seemed to me obvious and relatively simple.  Then last week I read a memoir by Darin Strauss called Half a Life, which won a National Book Critics Circle Award, and my complacency on the issue was given a good shake.

Half a Life is the story of how, when he was a senior in high school, Strauss was driving his dad’s Oldsmobile when a girl he barely knew, a junior at the same school, inexplicably swerved her bike across two lanes, collided with his car, and was killed.  Even though he was not responsible for the girl’s death, Strauss struggled with guilt that haunted him for decades.

I felt riveted by the writing and the story when I first started the memoir.  But I became troubled by Strauss’s writing about the girl’s family.  It has surprised and puzzled me how much this has bothered me. I won’t say it’s keeping me awake at night (other things do that), but I found myself thinking about it a good deal and feeling troubled by it. It has made me revisit the issue of the writer’s responsibility to other people.

Strauss first met the Zilkes when he attended Celine’s funeral, which was excruciating for him.  He acknowledges that his presence complicated Celine’s parents’ grief with the question of how they should treat him at the funeral.  “A possibly brave act for me, but awful for them.”

He describes the initial meeting with Mr. Zilke:

In the long moment before he found words, and as he took my hand, Mr. Zilke settled on an expression, a hard-won glint of: I will be friendlier than you have any right to expect me to be.

It occurred to me in reading this difficult scene that it was being filtered through a tremendously subjective narrator, which I suppose is true of everything in memoir. But I didn’t completely trust Strauss’s recounting of the encounter, wondering  if he had read something into Zilke’s expression based on his own guilt or on later feelings about the Zilkes.  It was a subtle thing, but it seemed slanted in a way that I didn’t trust.  I wondered how Mr. Zilke would remember the same incident.

At the funeral Celine’s mother says to Strauss that she knows it wasn’t his fault, but she wants him to promise something: whatever he does in his life, he must do it twice as well because he’s living for two people.  Strauss interpreted this as quite a burden to lay on an 18-year-old.  He describes her as looking at him as if to say, Why are you the one who is still alive?  But he doesn’t really know the Zilkes.  He’s just met them.  And Mrs. Zilke is at her daughter’s funeral, still shocked and stunned by grief;  perhaps she’d say anything.  I began to feel a little defensive on behalf of the Zilkes.  I felt sorry for them, and felt they were being portrayed somewhat unfairly.

At the funeral the Zilkes had invited Strauss to come by their house whenever he liked, so he thought he owed them a visit. He had expected something warm and cozy:  “They’d smile, maybe touch my cheek, we’d cry together.”  Apparently it was an awkward scene in which the Zilkes had a number of other people there, family members, fellow grievers, and they hadn’t been expecting Strauss. This was a few days after the funeral, and according to Strauss, Mr. Zilke announced to the group, “He’s here to say how sorry he is . . .To apologize.”  He offered Strauss a glass of ice tea and a coaster, and no one spoke a word.  When he showed Strauss to the door, Mr. Zilke said, “No matter what, we would never blame you, Darin.”

Strauss ends the description of this visit (and the chapter) with this dramatic line: “Five months later, I learned that Celine’s parents were suing me for millions of dollars.”  His anger and bitterness are evident, and perhaps rightly so.  The lawsuit dogged him for five years, creating enormous stress, before it suddenly collapsed.  Just hours before the trial was to begin, the Zilkes’ lawyer advised them to take the “go-away” money, minus his 30% of course.  There really was no case.

Maybe the problem here lies in me and not in Strauss.  There are awful people in the world.  Maybe the Zilkes are awful, or at least not very nice.  But they wouldn’t be the first people whose pain and loss resulted in anger and the desire to strike out, or to seek “justice,” even if misguided, through the legal system.  Maybe they were greedy and opportunistic, or under the thumb of a greedy, manipulative lawyer. Maybe they were heartbroken not only at their daughter’s death, but insulted that Strauss’s insurance company offered them $20,000 as the “go away” figure to avoid the “crapshoot” of a trial. Strauss says he feels sorry for the Zilkes, but he blames them as much as they blamed him.  He sees himself as the real victim.  In his late twenties, ten years after the accident, he writes:

Mrs. Zilke’s extracted promise felt immutable. Each equivocation and hedge, every dawdle, each dereliction and misdemeanor – all the human stuff of growing up – seemed to count against me on some celestial checklist.  I’d later think of Celine at my wedding and when my wife told me that she was pregnant.  Name an experience: it’s a good bet I thought of Celine while experiencing it.

I wrote in the margin next to this passage, “What does he expect?”  Why would he think he wouldn’t think of the young woman whose death he was involved in during these milestones of his life? Celine and her death were a part of him, as other formative experiences become a part of us.  I don’t quite trust that Mrs. Zilke’s “extracted promise” permeated his life to the extent that he claims.  At some point wouldn’t he have let the Zilkes off the hook a bit?  Understood their pain and loss more?

But of course that wasn’t his story, or the way he experienced it. He had a right to write his story as he felt about it.  But it was interesting to me how I separated from Strauss to some extent, extending my sympathy to the Zilkes, perhaps because he didn’t.  I’m sure not every reader would respond as I did.  A case can be made that the Zilkes were shits.  Still, it’s interesting to note that, at least in this case, if a reader feels a memoirist isn’t trying for the largest understanding and perspective regarding key players, the reader may do it for him.

I wonder why Strauss never contacted the Zilkes again.  I understand the obvious reasons.  But I wonder why, in coming to terms over many years with this huge event in his life, he didn’t want to sit down with them, have some human contact, maybe forgiveness on both sides.  And there is also the complicated matter that in publishing this memoir as it is written, he probably reopened a wound for the Zilkes. Not only to lose a daughter so tragically, but then to show up in a award-winning memoir twenty years later, looking like jerks.  Jerks without a voice to tell their own story.

Maybe that’s just the price of literature.  Maybe it’s like what Faulkner said about the “Ode to a Grecian Urn” being worth any number of old ladies.

I don’t pretend to have the answers.  It’s just that Half a Life disturbed me in a way I wasn’t expecting.  It raised anew for me the matter of a writer’s responsibilities to those we write about, and how complicated that can be.  Could Strauss have told his story in a way that did not portray the Zilkes in a negative light? Why should he, given how he felt about them?  If he had gone easier on them, or shown more compassion and understanding for them, would that have skewed his story falsely?

Did he owe the Zilkes anything, and if so, what?

Addendum: I posted this last night, and this morning I realized I hadn’t read the supplementary material at the back of the memoir–an essay by Strauss and an interview with him by Colum McCann.  I want to add what Strauss said about contacting the parents prior to the memoir’s publication:

“…when the book was about to come out, I wanted to write the parents a letter, a warning.  Of course, they’d sued me after having said they knew I was blameless–and promising they would always support me.  But I never blamed them for anything. (How could I? They’d lost a daughter, and I was walking around.) So I wanted to spare them the pain of being surprised by the book.  But the simple act of Googling them and writing the letter was hard– harder than writing the book.  It never goes fully away.”

I dunno.  I think it’s interesting that he blames them and then says he never blamed them.  At least that’s how I read this.  And it’s still all about him.  Writing the letter was hard for him–how was it for them receiving it?  I assume they didn’t respond to it, though he doesn’t say.  Still, it was definitely admirable that he wrote them to warn them about the book coming out.  There are not simple or easy ways of dealing with all this.