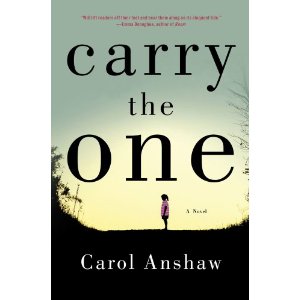 Carol Anshaw’s CARRY THE ONE

Carry the One is a wonderful novel.

I’ve tried to think what made the book so compelling to me that I felt a sense of loss when I came to the end.  It also gave me a bad case of writer’s envy.  I really, seriously wish I had written Carry the One.  I want to write like Carol Anshaw.

The novel doesn’t have much of a plot, which I considered a strength. Its terms are different.  It starts when several of the characters as young adults are involved in a car accident in which a young girl is struck and killed.  This event weaves through their lives over the next twenty-five years, affecting them in different ways and to different degrees.  But the accident isn’t as dominant, belabored, or causative as one might expect in a novel.  The event, while tragic and formative, certainly, is treated as one part of the whole texture of the characters’ lives, not the main catalyst for everything that follows.  Their lives involve much more complexity and depth over time than just this one event.  It is, however, a bonding experience that they shared, which continues to reverberate through the years, providing a recurring motif.

I found the characters in the novel more real than people I know, myself included.   Surely that is one thing we look for in books—to know others, not just superficially or guardedly, but in the round, three-dimensional, body, mind and soul.  That was one reason I felt almost grief when I finished the book, robbed when I couldn’t go right on with these people who had become so interesting and important to me.

Although the book has a lot of characters, just like life, there are three major players, three siblings whose lives we track over about twenty-five years.

Carmen is practical, tough, smart, politically active, divorced and remarried, and has a son, Gabe.   Carmen sees life with clear, unsentimental eyes, like the fact that her second husband, Rob, has considerable limitations, such as being non-confrontational and intransigent:

…Rob would continue to massage away every problem.  And Carmen would stay with him and accept this.  But inside, she had begun the process of losing her religion, the certainty of her own assessments.  Also, from here on she would always consider the marriage a small mistake.

But Carmen is also a realist.  She reflects later that someone “as fiendish on perfection as she… might need to make a few mistakes.  She would say he was a mistake that had turned out surprisingly well.”  Just like in real life, Carmen’s life…and marriage…are not simple or reducible.

Alice, oh Alice!  Alice is an artist, who over the course of several decades becomes recognized and successful.  She deals with the girl who was killed by painting her as if she has continued to move through time, getting older just like the survivors have.  Alice is a lesbian who has a mighty crush on Maude, who was also in the car along with Alice, her brother Nick, and his girlfriend Olivia, when they killed the girl on a dark country road following Carmen’s wedding. Alice’s fixation on Maude is highly erotic and terribly painful, as Maude comes and goes in Alice’s life.  In the meantime, Alice paints, tries to be with other lovers, and remains deeply intertwined with her siblings Nick and Carmen.  When Maude and Alice reunite after many years, “In spite of time and change, there was still some of the old Maude left.  She was still a teenage guy in bed.  Still a big reader, a big talker.  A huge supporter of Alice’s career…”  But they’re not able to sustain the relationship:

Alice tried to hang on to her role as the supplicant, shouldering the burden of keeping Maude interested.  She couldn’t admit, until the fourth or fifth occurrence, that she was experiencing short, slick patches when her interest slid off Maude.  And after that came a longish while during which Alice thought, well a little boredom sure, wasn’t that a part of being in something long term?

Anshaw knows well the feeling of a love obsession, the power of it, and the effects of time on it.  After so much passion for Maude over so many years, Alice is puzzled over the denouement of her feelings for her.  She asks her friend Jean if she is crazy, or maybe a terrible person.

“Maybe you’re just not in love with her anymore.  In spite of putting us all through holy hell over her.”

“But how could that be possible?”

“Never discount the power of time,” Jean said. “Time is always a player.”

Time is a major theme in Carry the One, and one I felt hungry for.  There’s something fascinating in watching lives over time, how people evolve, change and become themselves only more so. Anshaw captures the effects of time extremely well.

The third major character is Nick, Carmen’s and Alice’s brother.  Oh Nick, I wish I could save you.  Nick is an addict, which is putting it mildly. Reading Nick, you will understand more about addiction than you can stand.  He’s also a brilliant astronomer, when he isn’t completely wasted on drugs.

He couldn’t explain to her, to anyone, the whirl astronomy sets up inside a person’s head, the vertigo that comes with trying to understand what’s going on way out there. He might be the first person to understand a significant piece of missing information.  People didn’t see that pursuing information on this scale can be agitating.  He needed something to help him chill out.  Drugs were just extremely helpful.

The title of the novel comes from a comment Alice makes about the connection between those involved in the accident that killed the girl. She says it’s like in arithmetic.  “Because of the accident, we’re not just separate numbers.  When you add us up, you always have to carry the one.”

Nick carries the one especially, because the night of the accident, he saw the girl about to step onto the shoulder of the road before she was struck, but being so stoned, he was just too interested to see what would happen that he didn’t grab the steering wheel to prevent the accident. Whether his downward spiral over the next several decades would have occurred anyway is left to our imaginations.  Like life, nothing can be simply attributed to just one cause.  Nick is a vivid, tragically drawn character whom his sisters love and cannot help.

Every sentence in the book is wonderful.  Anshaw has a perfect voice: wry, sharp, dryly humorous at times, deeply empathetic without being sentimental, wise about so many things –passion, motherhood, marriage, family, friends, politics, addiction, art.  She captures the rather ordinary lives of all the characters in brilliant detail, line by line.  Her strong, confident, authoritative narrator knows these characters completely, and captures them both from the inside and the outside, seeing them more clearly than they can see themselves.

Carry the One is not a long book, but it is a rich and dense one.  It has so much life packed into it, it’s so much about life, what life feels like for these characters (and the reader by extension), and what it is to live through time.  To me it felt like coming face to face with life itself.