In my last post I commented that one reason I liked Carol Anshaw’s Carry the One so much was that I felt the writer’s sensibility permeated the novel.  There’s a unique personality behind the curtain, narrating and describing even as the third person point of view ranges among a number of characters.  The novel has what I think of as voice.  I’ve tackled the subject of voice in writing in an article in which I described it as “the external manifestation, in language, of the writer’s sensibility: how she sees the world; her values; what she is attracted to in terms of subject matter; her style as expressed through diction, syntax, tone. Her expression and essence as an artist and person, really.”

So it was an interesting surprise to me that the next novel I read, Brooklyn, by Colm Tóibín, seemed not to have voice.  It occurred to me that the writer was self-effaced, a term I have never heard of, so I made it up.  It is different from voice, in which the writer’s personality or sensibility shines through.  Here I forgot about the writer.  And yet I loved Brooklyn.  I loved it equally but differently from Carry the One.  I was reminded that while good writing may all be fruit, there are differences between apples and oranges.  As a writer I’m always interested in what kind of fruit a novel might be.

Brooklyn is the story of a young woman, Eilis Lacey, who, unable to make a decent living in her small town in Ireland in the fifties, is offered the chance to move to America, to Brooklyn.  She’s sponsored by an Irish priest there who finds her work in a department store and arranges her lodging in a boarding house.  At first Eilis suffers intense homesickness for all she has left behind, especially her mother and her glamorous sister who has sacrificed so that Eilis might have a better chance in life.  Gradually she settles in to her new life, taking night classes in accounting to improve her employment possibilities, and finding love with Tony, who is Italian, a plumber, and loves the Dodgers almost as much as he loves Eilis. When her sister dies suddenly, Eilis returns to Ireland and her mother, and must decide which life to choose, home or Brooklyn with Tony.

Synopsizing the plot, I realize that it sounds pretty mundane.  But Brooklyn is a remarkable book, one I can’t recommend highly enough. Reading it, I was conscious of how each sentence seemed to be laid down one after another like bricks–plain, solid, even. If that sounds laborious, heavy or tedious, then I am not conveying the skill with which the story unfolds.  Maybe I should say glass bricks, because the prose is so transparent that I felt I was seeing straight through to every important thing about Eilis’s life. By the time all the bricks are laid down, Tóibín has built a whole world as real as any you know.

The entire book centers on Eilis, with the effect that one becomes deeply engrossed in her. She is one of the most appealing characters I’ve come across in fiction.  She’s modest, reserved, young, and torn from her roots.  She is invariably treated by Colm with the dignity and seriousness she deserves.  She is straightforward, without artifice or malice, with a calm, interior, unself-conscious intelligent.   It is an entirely satisfying experience to watch her go through the common moments and events that compose her life—working at the department store, going to a dance, navigating her landlady, meeting Tony’s big Irish family, going to a Dodgers game. As seemingly unsensational as the material seems, I was never for a moment bored by it.  Exactly the opposite.  I felt happy anticipation every time I returned to Eilis and I was never disappointed with what I found.

The point of view in Brooklyn is third person with the omniscience limited to what Eilis can know or experience. Toibin’s intentions were to submerge us in Eilis, with no distractions to remove us from her mind and world.  The plain writing reflects his attention to his character’s story—one that is quiet but deep.  By convincing us that we are experiencing her reality exactly as she experiences it, in keeping with her own sensibility, we are completely transported into that time and place–Brooklyn in the fifties– and into this one young woman whom we come to know deeply. 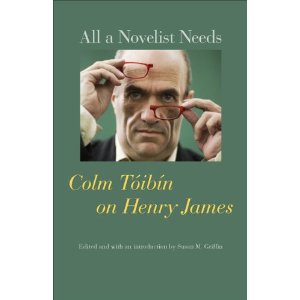 All a Novelist Needs: Colm Toibin on Henry James

As a writer himself, Toibin has steeped himself in Henry James. He wrote a historical novel about James called The Master, and has a book of critical pieces on James, All a Novelist Needs: Colm Tóibín on Henry James. Surely his immersion in James has influenced his own work mightily.  Every moment or action in Brooklyn is carefully chosen and closely observed.  Tóibín is never guilty of what Henry James called “weak specification,” where the eye glides over the page if the writer neglects concrete details.

I wanted to quote from the book, to give you a sense of Toibin’s style.  But I found it hard to find a passage to pull out, it all seems so of a piece, constructed so seamlessly.

But then I thought of the following scene.  It’s when Eilis, a virgin, has unanticipated sex for the first time with her boyfriend Tony:

When he moved on top of her and entered her she tried not to gasp as she began to panic.  It was not only the pain and the shock but the idea that she could not control him, that his penis was pushing into her deeper than she wanted it to go… That she could not shout made her panic even greater; she put her energy into tightening her whole body with all the force she could gather.  And as she did so he gasped, he made noises that she did not imagine anyone could make, a sort of muffled whining that did not let up.  As he stopped moving she tightened more, hoping that that he would now take his penis out but instead he lay on top of her, gasping.  It seemed to her that he was unaware of anything except his own breathing, that in these minutes as she lay with him quietly on top of her he did not know or care that she existed. She had no idea how they were going to face each other now…

I love it that a man wrote this.  See what I mean about closely observed?  It is so authentic, so unadorned, with the plain, simple prose capturing the characters perfectly.  They’re so real.

Tóibín continues the scene, with Tony now kneeling by the bed and slowly undressing Eilis, “approaching her gently, almost shyly.”  When she realizes that he wants to enter again, she tells him he had pushed in too far the first time.

“I thought you would go up into my neck.”  She laughed under her breath.

She pinched him hard.

“Hey, that hurt,” he whispered and kissed her, moving slowly on top of her.

This time the pain was almost worse than before, as though he were hitting against something inside her that was bruised or cut.

“Is that better?” he asked.

She tightened as much as she could.

Once again, as he pushed in further, he seemed to become unaware that she was with him.  He seemed lost to the world. And this sense of him as beyond her made her want him more than she had ever done, made her feel that this now and the memory of it later would be enough for her and had made a difference to her beyond anything she had imagined.

That’s because Toibin’s a master.