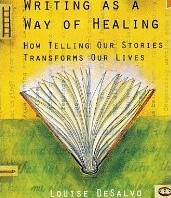 In an earlier post (July 24, 2011) I mentioned Louise DeSalvo’s excellent writing book, Writing as a Way of Healing, and in particular her “stages of the writing process.”  If you’re writing a memoir that involves pain, her book is invaluable.  If you’re not writing as a way to help heal, it’s still a great book.  And even if you’re not even writing memoir, it’s got worthwhile things for writers, such as her description of the stages of the writing process.  It may help at times to know there ARE stages, and to identify which one you’re in at any given point in writing something.  It may help you go the distance.  There are many schemas for writing process stages, but I like hers the best of the ones I’ve seen.

DeSalvo says every creative project is different, but that they usually involve passing through a series of stages in a predictable order.  These stages do not necessarily occur in lockstep.  You may go back and forth between some of them, but in my experience there does seem to be a progression and as she points out, identifying them and knowing what to expect from each stage can be very helpful in seeing a project through to completion.

The first is “Preparation Stage,” in which you have an idea, an image, an incomplete vision or vague intuition maybe.  She describes it as “partially conscious, partially instinctive.”  You want to write something, and it begins to build and form in your mind.  You might be spurred by something you read, you might do some pre-writing, such as clustering, in which you circle a key word in the middle of the page, and then brainstorm all the associations that come to mind, branching them out in all directions from the key idea or subject as fast as you can, in a right brain way.  You might doodle or make lists or even draw something.  DeSalvo comments that she thinks beginning writers often spend too little or too much time at this stage, which I found interesting.  “Some avoid it altogether and plunge right into working, which can derail our process.”  You’re not ready yet.  Let things build a bit, but determine to move on.

The next is “Germination Stage,” “during which we gather and work on fragments of ideas, images, phrases, scenes, moments, lines, possibilities for plots, characters, settings.  Sometimes we don’t quite know what we’re doing or where all this is leading.”  I’ll say.  Again, this seems more a right brain thing, where you’re more or less musing and not consciously, rationally, linearly figuring things out.  You’re letting things accumulate and generate and multiply: i.e., germinate.   Natalie Goldberg in Writing Down the Bones has a similar idea she calls composting.  “Our bodies are garbage heaps: we collect experience, and from the decomposition of the thrown-out eggshells, spinach leaves, coffee grinds, and old steak bones of our minds come nitrogen, heat, and very fertile soil.  Out of this fertile soil bloom our poems and stories.  But this does not come all at once. It takes time…”  The important thing here is not to rush too quickly into writing a first draft, because you may run out of fuel.  In the germinating stage, you’re tanking up and building up pressure (and material) to carry you through the next stage.

“Working Stage” – or what I call the first draft.  Here’s where you’re actually going to try to get all the way through from the beginning to the end.  At some point you actually have to get a whole draft.  Some writing instructors refer to the first draft in rather stinky, visceral imagery: shitty or vomit.  Well, if that helps you, fine, but I prefer to just think of it as a first draft, and accept it as such.  If you keep in mind that you’re in the working stage of the whole writing process, you won’t have to get into the drama of disparaging it as shit or vomit. It’s just a first draft, for Pete’s sake.  You are going to go on to later stages, in which it will get better.  And here’s another thing: are you human?  I thought so.  So you will undoubtedly want to get it right the first time.  You cannot overcome this part of your human nature.  Trust me, I know.  You will want to believe that what you have written is “it,” that you’ve written it, you’re finished—even while a part of you knows that there is a whole lot more work that lies ahead.  Take a deep breath and tell yourself you’ve completed the “working stage” – you’ve built a draft, no matter how incomplete and inadequate it is.  But it is not shit or vomit.

Now you’re ready to move on to the “Deepening Stage.”  All these stages of writing are interesting and enjoyable, once you get with the program that you’ve got to go through them.  DeSalvo describes this stage as where we “revisit, rethink, reimagine, and revise what we’ve been doing.  Often during this stage we learn what our project is really about, even if we’ve been working on it for years.”  Oh god, if only we could!  Learn what it is REALLY about!  Well, hopefully we can.  If we’re patient and trust the process.

Here are DeSalvo’s questions to ask during the deepening stage:

What else can I say about this?

What else was I feeling?

Why did this happen?

Why else did this happen?

Is this really how it happened?

Is this really how I was feeling?

Is this really how they were?

Can I say even more here?

Would someone who didn’t know me or what I experienced understand this?

Is this as clear as I can make it?

What connections can I make here?

She’s addressing writing memoir, but these questions or ones like them which you can pose for yourself would work for characters and situations in fiction too.  Often at this point, it’s good to turn to readers to give us feedback, to help us to “re-see” what is actually on the page and what isn’t.

Next comes the “Shaping Stage,” or at least we hope so!  God help us!  Now, it may be that we have already done a good deal of shaping, “during which we find the work’s order and form.”  But now, having passed through the previous stages, we are just so much deeper into the project or piece and we can see much better what has been trying to come into being.  We “follow our intuition about how our work should be organized—what scene should come first, what should follow, what should be juxtaposed with what, and how it should end.”  How many of us write a “front porch” to get into the house of the piece?  Now we might see that we can start in the entry hall, next to the umbrella rack, so to speak, and skip the front porch entirely.  Or maybe the whole thing needs a retrospective voice, now that we know the story all the way to the end. Lots of “re-vision” possibilities here.  DeSalvo says “it is at the shaping stage that we take a piece of writing and turn it into a work of art.  For it is at this stage that we finally give our full attention to form, and we can reap the emotional benefits of having turned the seeming chaos of our experience into the order of a fully realized, carefully crafted, highly original work…perhaps now, for the first time, we think of a reader…”  This is a crucial step at some point—to understand what the reader needs, whether it be fiction or memoir, and begin to move from our personal, private involvement in the project to a more public rendition of it.  We see to the best of our ability how readers will experience what is on the page, and what they need and ONLY what they need.  We read our work as READERS now, not as the writer of it.

Now we come to the “Completion Stage.”  Praise the lord.  Oops, we’re not finished yet.  “…during which we again revise, revisit, rethink and refashion.  During this stage we sometimes seem to know more easily whether an element belongs or doesn’t, whether a solution will work or won’t.”  Often, god willing, during this stage, we actually know with certainty what we’re doing and how to do it.  We have achieved this state (or stage) of grace by passing through the earlier stages.

Last but not least, she identifies the “Going-public Stage,” “during which we make the work, and ourselves, ready for others and, perhaps, ready for publication.”  I love her for putting in this stage, and putting it last.  It separates it from the actual writing of something, in which we don’t want to get bogged down in either fear of what others will think or visions of grandeur, our amazing success (rats! Oprah is off the air.).  In memoir especially there may be a great need to get the work and ourselves ready for others and publication.  We may decide to change some things to protect if not the guilty at least ourselves, run it by people we’ve written about, check with a lawyer…  But in fiction too, we may need to prepare ourselves for what lies ahead: a whole new territory in which we go public, try to get published, and face opinions, judgments, dark night o’ the soul type thoughts.

I hope this summary of the stages DeSalvo delineates will be helpful to you.  She has extended discussions of each stage in her book, if you want to know more.   I think the value in knowing about these stages is that you might not feel so lost at sea in a project.  In a way it’s an aid to feeling a little more control in what is basically a non-linear, non-controllable creative act!

As I was contemplating this posting over the weekend, I had a mind-boggling experience with my own work.  My novel, The Answer to Your Question, has been with my agent for some months and has been rejected by a number of editors (I know, I know). I decided to take a look at it again, after not having read it for a long time.  Reading it with fresh eyes, I suddenly saw some problems with the ordering of the material; it amazed me that I’d not been able to see these issues before. I set about correcting them, which will take some time.  I suppose I had backslid into the “shaping stage,” having thought I had wrapped up the “completion stage.”  But I didn’t really know or care.  I just wanted to fix things (yet again) with my new insights.

So maybe there should be a stage called “Put the thing away long enough to see it anew, as a reader might.”  And then follow your internal Geiger counter that tells you what to do until you’ve taken it as far as you can–again and again…

It is, after all, just one long stage–called “Process.”