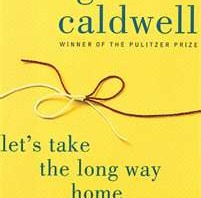 My friend over at the wonderful blog Narrative, Richard Gilbert (http://richardgilbert.wordpress.com/) called my attention to the memoir Let’s Take the Long Way Home, by Gail Caldwell, which he admires greatly, so I read it while I was on vacation in Boston and Maine in August. I’d glad I did.  He has several posts on Caldwell’s use of metaphor and you’ll enjoy reading them, along with seeing a videotape of her commenting on writing the book and reading from it, which was moving.

I had never been to Boston and I booked a $100.00 a night room at the Sheraton on Priceline.  What a deal!  And when our room wasn’t available by 3:00, they upgraded us to a suite on the 26th floor with a wonderful view of the Charles River and MIT on the other bank.  I hadn’t realized that Let’s Take the Long Way Home takes place in Cambridge, and that the two women friends in the book do a lot of rowing on the Charles River.  So it seemed fitting to start the book while having that particular view.

It’s a sad book, about the friendship between the author and Caroline Knapp, who wrote the memoirs Drinking: a Love Story, and Pack of Two: The Intricate Bond Between People and Dogs, and who died at the age of forty-two of lung cancer.  The two women had at the least writing, rowing, swimming, training their dogs, and overcoming alcoholism in common, and theirs was apparently an extraordinary friendship.  I was particularly interested in the parts about dogs, being a dog owner with an untrained, untrainable dog, which they would have found unacceptable if not unbearable, and with Caldwell’s description of her alcoholism and her recovery from it, which gave me a much greater understanding of the disease.

But where the book really gripped me was in its depiction of grief.  There are many memoirs on the loss of a partner or loved one—notably Joan Didion’s and Joyce Carol Oates’ about losing their husbands—but I found Caldwell’s ability to describe what she experienced in losing someone she deeply loved particularly eloquent.  Her writing sounded the depths of loss in my own life—both deaths already experienced, and those waiting in the wings to take center stage.  Such loss is unavoidable; it comes to us all.  But it takes a writer of Caldwell’s gifts to give words to those universal feelings and in doing so, to provide us with an understanding of our own, often inchoate feelings.  To have them so beautifully and authentically named, expressed, is a balm and a blessing.

You can see what I mean for yourself.  Here is a passage that comes after Caroline has lost the ability to speak following bleeding in her brain:

“We had spent years talking—talking when other people would have given up, teasing apart feelings and conversations and the intricacies of daily life.  Now she couldn’t talk anymore and so I didn’t either; our narrative became a choreography of silence. I would spend hours at the end of her bed, not knowing much of the time if she even knew I was there.  But Caroline and I had begun our friendship with a bond devoted to the elegant truths of nonverbal language: the physicality and hand signals and eye contact that dialogue with an animal entailed.  When she had first fallen ill, I had brought to the hospital a T-shirt that she loved, from the Barking Dog Luncheonette in New York, with SIT! STAY! written on the back.  I knew all about sit-stay, and how straightforward and essential it was, and so that was what I did.  I sat and I stayed.”

I find this a beautiful, heart-rending passage.  I admire the naturalness of the writing, the seeming effortlessness and inevitability of it.  Caldwell achieves the kind of writing that seems to flow of its own accord, as if there could be no other way to say it. The simple, ordinary words “sit, stay” – once such a part of the two women’s everyday, shared lives — transmute in this new context, suddenly encompassing the saddest and deepest of feelings.

Caldwell does a remarkable job of limning what grief is like for the one left behind:

“The only education in grief that any of us ever gets is a crash course.  Until Caroline died I had belonged to that other world, the place of innocence and linear expectations, where I thought grief was a simple, wrenching realm of sadness and longing that gradually receded.  What that definition left out was the body blow that loss inflicts, as well as the temporary madness, and a range of less straightforward emotions shocking in their intensity…”

She is afraid she will not be able to get through Caroline’s memorial service.  “A part of me went through the appropriate motions with frightening alacrity: finding the poem to read at the chapel on Friday morning, practicing it aloud.  But another part of me had the simple conviction that I wouldn’t be able to get from point A to point B—that giving her over, in spirit and in public, was as perplexing and unfathomable as string theory.”

A friend counsels her when she tells him of her fear, telling her something “of such consolation that I will hear him saying it forever.  ‘You know, Gail,’ he said, ‘we’ve been doing this as a species for a long time. And it’s almost as if—it’s like the body just knows what to do.’”

She wishes in the months following Caroline’s death that she could call her, “half assuming I could, to tell her what her dying had meant, what her death had done to my life.”  Again, Caldwell captures so perfectly that sense of loss and bewilderment when one who has been so essential is gone.

Eventually, “Life’s irrefutable forward motion, a one-way arrow pointed past the dead.  For months I felt the violence of time itself, as though some great barge carrying the rest of us had left Caroline stranded on the shore…”

“And then finally, unwittingly, acceptance warps itself around your heart…”  Caldwell sees a framed Pablo Neruda sonnet on the wall of an open house in her neighborhood:

“Absence is a house so vast
That inside you will pass through its walls
And hang pictures on the air.”

“I lived in that house of absence, took solace in it, until sorrow became a stand-in for what was gone….I knew I would never have another friend like Caroline; I suspected no one would ever know me so well again.  That she was irreplaceable became a bittersweet loyalty: Her death was what I had now instead of her.”

Some of the best memoirs are memorials, written to honor and preserve and release what has been lost.  Let’s Take the Long Way Home is a moving memorial to a friendship that ended too soon, and gives voice to the experience of great loss, and how one goes on.