The Member of the Wedding: “We all of us somehow got caught.” 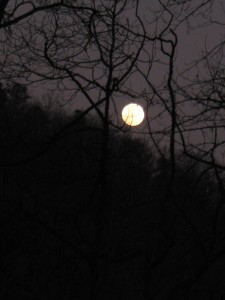 What a profoundly beautiful novel The Member of a Wedding by Carson McCullers is!

I first read it in my early twenties after I had been to Breadloaf, where people still spoke of McCullers being there, and where I first saw her photograph: that elfin face and dark, sad eyes. I would have liked to be the next Carson McCullers, but that was not to be (by a long shot), but I have kept Member all these years, when so many other books have come and gone. Maybe I thought I’d reread it someday, or maybe I just remembered how it had moved me and didn’t want to part with it. I knew I wanted to write about the 1940s and blacks and whites in the South while I was at Hambidge this March, and as I was perusing my bookshelf for books to bring, The Member of the Wedding, with my maiden named scrawled in my atrocious handwriting on the first page, seemed almost to leap of its own volition into my hands and suitcase. The time had finally come to read it again.

When I say it is beautiful I don’t mean “beautiful” in the casual way we normally overuse that word. I mean beautiful in a deep, amazing, poetic, truth-y way. A deeply aesthetic experience, like great music or literature. An experience of beauty.

Which is not to say it’s for everyone. In fact, I wonder if in 2011 I am the last appreciative reader. Hopefully and probably not, and for all I know there is an enthusiastic Carson McCullers fan club. But if I am the only one, so be it.

I will say that I can’t quite imagine men—male readers—being so taken with the book. I may be wrong (I so often am about matters of gender). But it strikes me as so unusually female—as coming from such a non-negotiable female sensibility—that I don’t feel it would interest men very much. Women and children, after all! That’s about it. The father makes a desultory appearance now and then but basically it’s all a female existence. There is one black woman, Berenice, a maid; a twelve year old white girl, Frankie, who is struggling painfully like something trying to break out of the chrysalis shell of childhood into an uncertain adolescence and womanhood; and there Frankie’s cousin John Henry West, six years old and surely the most tender, endearing, quaint and ultimately heartbreaking child in literature. These three spend the Southern spring and summer mostly talking in the kitchen (but what talk it is!) as Frankie awaits the wedding of her brother, placing all her hopes and dreams on the notion that the bride and groom will take her with her out into their world, the larger world. For they are, to a lost Frankie, “the we of me.”

It’s a novel about isolation, loneliness, self-doubt, trying to connect, trying to communicate, and ultimately, about love (no wonder it appealed to me then and now). These are the themes of the human condition and for me they’ve never been sounded with more authority or understanding than in Member. (It occurs to me that maybe you need to be Southern and female to “get” the book in this way.) Love, when it does come, is unexpected and evanescent. Take this lovely moment when Berenice, whom restless, fretful, difficult Frankie (who at this point in the book is going by the name F. Jasmine) is always sassing, contradicting, testing, and opposing, takes the overgrown, lanky emerging young woman onto her lap:

“F. Jasmine rolled her head and rested her face against Berenice’s shoulder. She could feel Berenice’s soft big ninnas against her back, and her soft wide stomach, her warm solid legs. She had been breathing very fast, but after a minute her breathing slowed down so that she breathed in time with Berenice; the two of them were close together as one body, and Berenice’s stiffened hands were clasped around F. Jasmine’s chest. Their backs were to the window, and before them the kitchen was now almost dark. It was Berenice who finally sighed and started the conclusion of that last queer conversation.
‘I think I have a vague idea what you were driving at,’ she said. ‘We all of us somehow caught. We born this way or that way and we don’t know why. But we caught anyhow. I born Berenice. You born Frankie. John Henry born John Henry. And maybe we wants to widen and bust free. But no matter what we do we still caught. Me is me and you is you and he is he. We each one of us somehow caught all by ourself. Is that what you was trying to say?’”

The novel is full of dialogue, and it is brilliant stuff, disguised as the meandering talk of the three outcasts in the kitchen. Frankie throws out faux-adult questions and pronouncements, John Henry speaks with childlike innocence and candor, and Berenice, whose voice is described as golden and quiet at times, like singing, has wisdom to impart based on a lifetime of injustice, pain, and regret. She often riffs on the love of her life, her first husband, Ludie, who died too young. “’Sometimes I almost wish I had never knew Ludie at all,’ said Berenice. ‘It spoils you too much. It leaves you too lonesome afterward. When you walk home in the evening on the way from work, it makes a little lonesome quinch come in you. And you take up with too many sorry men to try to get over the feeling.”

When Frankie asks her why she isn’t going to marry her current beau, Berenice says, “I respect and regard him highly…but he don’t make me shiver none.”