The Still Point of the Turning World: A Moving and Uneven Memoir 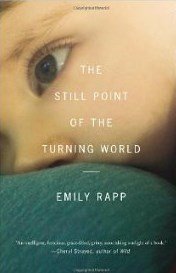 The Still Point of the Turning World by Emily Rapp

Emily Rapp was a creative writing student of mine at St. Olaf College in the early 1990s.  She was an unusually gifted writer even as an undergraduate, standing such head and shoulders above the other students that it was a given that she was headed for a successful career as a writer.  She was also lovely, a beautiful, vivacious redhead, delightful in every way to the extent that I knew her.  She had just about everything she needed already in place: a keen intelligence; a gift for language; a rich, complex sensibility; and a literary style and voice already well developed.  The only thing she lacked was age and experience.  Time would take care of both of those.

She did indeed go on to a distinguished career as a writer and professor of creative writing.  In 2007 she published a memoir called Poster Child, which, for reasons lost to me now, I never finished reading.  I think the subject matter, her experiences with having her left foot amputated at age four due to a congenital defect, and losing her entire leg by the age of eight, didn’t engage me sufficiently.  Of course it is about more than that—about living with a disability, about self-image, especially as a female, about acceptance of one’s body, no matter if flawed.

Emily now has a new memoir out which is getting a lot of attention, such as a full-length, positive review in The New York Times Book Review.  She was on the Today Program (I know because we’re friends on FB), and the book is being widely reviewed and well received.  The memoir, The Still Point of the Turning World, traces her ordeal and grief over the shocking diagnosis in January, 2011, that her son, Ronan, nine months old, had Tay-Sachs disease, an always fatal, genetic, degenerative disorder that usually results in death by the age of four or five.

At the suggestion of a friend, Emily began blogging about her experience.  The blog, Little Seal, (“Ronan” means “little seal” in Irish) was named one of the 25 Best Blogs of 2012 by Time Magazine.  Emily had found a great outlet for the turmoil in which she was swept up, and an appreciative, sympathetic audience.

Still Point has some of the most moving, beautiful writing that I’ve read in any grief memoir.  Especially in quiet moments with Ronan, she captures the heartbreaking sadness of losing her baby bit by bit:

I stopped for a moment and gently removed his hood. I let the wind ruffle his red-blond hair and I looked at his sleeping face and I rocked him for a bit in the sun.  We kept walking into a tunnel strewn with dry leaves where both our shadows disappeared and we were alone.  I stood still and listened to his breath and mine.  I felt a momentary flash of peace, a great still pause.  T.S. Eliot’s ‘still point of the turning world,’ and of course this terribly tender love, and I thought, This is all I have to give, and I tried with all my strength to pass that feeling into Ronan, and then I thought, Remember this.

But too often in the book, at least for my taste, there is something manic, perhaps a bit hysterical (and why not!), repetitive, and overly intellectualized.  We often go off on what feels like tangents or filler, especially in discussions of books or some of Emily’s own past related to her disability.  It felt too stream-of-consciousness at times, as if journal entries that maybe should have been cut were included. This passage, for example, captures some of what I think hurts the book:

The more I wrote about Ronan, the more I understood that the only way grief would not take me down completely was to greet his diagnosis head-on and make my world big, make his story known.  His myth is an account of loving and letting go, it’s about art and literature and movies, about theology and philosophy and animals.  It is about the joys and costs of refusing to look away, of diving into the abyss and kicking around in it, about going forward in life even though there is no sign that things will change or be solved or get better.

At time it felt as if anything Emily wrote ended up in the book.  I longed for a good, hard-nosed editor to make some tough decisions and whip it into better (leaner) shape.

Maybe it is uneven – some great stuff, some parts that needed tightening or deleting – because it seemed rushed into print.  Emily’s writing in her “Little Seal” blog was so striking and the story so wrenching that she was garnering a great deal of attention and praise.  It must have been a partial antidote to her pain and grief to have all the attention and excitement the blog was generating.  I imagine most everyone involved saw an opportunity to capitalize by bringing out the memoir as soon as possible.  It was published a month after Ronan’s death, which means it was in production months before he died. The subject was grief, not necessarily the whole story of Ronan up to his death just shy of age three.  Still, I wonder if maybe it would have been a better book if more time had passed before it was published.

There are times when Emily pontificates (“We Americans thrive on notions of self-improvement and transformation; we believe this is part of our national ethos and are befuddled by situations that defy solutions.”) and she seems brittle and furious in ways that I wonder if time might have softened.  I felt mystified by how hard she is on people who are at a loss as to what to say to her, how unsympathetic to their attempts to say something sympathetic or supportive.  When she gets sympathy cards she throws them away without even looking to see who sent them, “and I didn’t care if this was cruel.  ‘They’re trying to be nice,’ my mom told me.  I did not care.  The era of being nice was over.”

Why?  Why is being nice over?

She’s hurting, she’s angry, she’s a bit arrogant, as if she’s the only one who has ever gone through painful loss. Woe be to anyone who tells her they’re sorry “(‘If there were a single phrase I could choose never to hear again in my life, it would be “I’m sorry.”)  But people are sorry, genuinely sorry for others’ pain and sorrow.  And please don’t tell her “You’re so brave,” because it’s a “distancing maneuver disguised as a compliment.”  “Behind these words you can practically hear a voice screaming, don’t ever ever please please please don’t let it happen to me . . .”

I thought of the story of the mustard seed, where a woman whose son has died is stuck in her grief and pain.  She seeks counsel from a Buddhist monk, who sends her to find someone who has not experienced pain and suffering and ask them for a small mustard seed.  She goes from house to house all over the kingdom, but cannot find such a person.  She returns to the monk, having learned the lesson that no one is spared.

Emily is at her best—and it is wonderful and true writing, indeed—when she is the smallest, in a sense, the most personal, speaking directly of her own feelings, not trying so hard to over-reach  (she’s a self-described ambition addict).   Here she describes how she and her husband felt sitting in the pediatrician’s office, hearing the grim options that lay ahead (feeding tube, suction machine, end of life care . . .):

We felt grotesque and out of place in our own lives. You can, for just a moment, fuse grief like a bone, but the memory of the ability to bend lingers inside, like an itch running in the blood, just beneath the skin: relief is always temporary. Grief, we understood, would now hijack a part of our day for the rest of our lives, sneaking in, making the world momentarily stop, every day, forever.

It is this kind of writing, rather than a discussion of Thomas Mann’s The Magic Mountain, that makes Still Point a remarkable book.

I found the last part of the memoir incredibly moving, to the point of tears.  Emily and her husband (the marriage, sadly, did not survive Ronan’s illness and death) visit Upaya Zen Center near Santa Fe where they live.  There it feels as if all the desperate striving, questioning, and intellectualizing that have consumed so much of Emily over the course of Ronan’s fading begins to fall way.   Emily starts to accept Ronan’s inevitable early death and come to terms with it.  One of the sessions involves photographs of dying people, or the “death portraits” of people who had just died.

In the Buddhist tradition, dying is an inevitable part of life. Learning how to live is about learning how to die, both figuratively and literally.  Dying to the delusions. Dying to the relentless and unending demands of ego. . . All must come unbound and undone. All will unravel.  It’s one thing to accept this on an intellectual level, but it was an entirely different experience to hear those truths spoken aloud while looking at the faces of people who had just died, some of them showing the marks of struggle, others peaceful, some newly born, others so thin the bones of the face looked almost transparent.  Some with open eyes, fearful eyes, open mouths, clenched fists, soft baby skulls.  I had the thought that this was perhaps my first moment of being an adult, and that I was, just now, finally prepared to be a mother to Ronan. Other people had weathered this, I thought. So could I.

Emily’s own version of not finding the mustard seed, perhaps.

She goes on, eloquently, arriving at a moment which we, as readers, have been longing for her to get to (and take us with her) throughout the book:

I didn’t want to be a hysterical mess during Ronan’s final moments; I wanted to be loving and calm.  I wanted to be a witness.  I wanted to sharpen what was essential in my life and let some of the endlessly worrying externalities go fuzzy.  I wanted a less bossy brain, a less insistent heart, less clutch at the life of my baby.

Anyone who reads this book will want that for Emily, too.