WILD: from Lost to Found on the Pacific Crest Trail — a Wonderful Memoir!

Cheryl Strayed’s memoir Wild: From Lost to Found on the Pacific Crest Trail is an amazing and wonderful book.  It’s certainly one of the best books I’ve read in a long time.  It’s beautifully written, so skillful in its craft, and so deep in its heart and feelings.   I found it totally engrossing, entertaining, and moving.

I think you would find it equally fine, but I do admit I’m prejudiced.  Cheryl was a student of mine in a graduate level fiction writing class in the fall of 1990, when she was senior at the University of Minnesota.  It was that following spring that Cheryl’s mother died of lung cancer, forty-five days after her shocking, unexpected diagnosis, at the age of forty-five.   When Cheryl came to my office to tell me, we both cried.  I have never seen anyone as heart-broken.  Even at twenty-two, Cheryl was one of the best students I have ever had. There was something so special about her, so bright and receptive, mature, warm, talented, and genuine. I felt honored to know her and call her a friend.  I recognized, as anyone would, that she was already on her way to being an exceptional writer.  Over the years she worked hard at developing her talent, with a commitment and sacrifice few people are able to muster.  She published some knockout essays, and in 2005 she published an excellent autobiographical novel, Torch, that deals with her mother’s death. But it is with Wild that she has achieved a spectacular success:  Knopf’s lead spring book; rave reviews in The New York Times, the NYTBR and just about everywhere else; a spread in Vogue; foreign rights sales in many countries; a big book tour; the movie rights bought by Reese Witherspoon; and #6 on the NYT nonfiction best seller list this week. None of this is a flux or some literary form of mass hysteria.  People are responding with such “wild” enthusiasm because the book actually deserves it.

The memoir braids the surface story of twenty-six year old Cheryl hiking 1100 miles of the Pacific Crest Trail alone with the emotional back story of losing her mother, having her family disintegrate after her mother’s death, and her own subsequent “wilding,” in which she began having affairs, got into heroin, divorced her young husband whom she loved, and changed her name to Strayed, because, as she puts it:

“I had diverged, digressed, wandered and become wild. I didn’t embrace the word as my new name because it defined negative aspects of my circumstances or life, but because even in my darkest days—those very days in which I was naming myself—I saw the power of the darkness. Saw that, in fact, I had strayed and that I was a stray and that from the wild places my straying had brought me, I knew things I couldn’t have known before.”

She’s terrific at capturing the physical aspects of the hike itself, but what creates a lot of the poignancy and power of the book is Cheryl’s ability to capture her inner life, the exploration of the past that has brought her to this necessary journey alone and on foot. She convincingly tracks her internal movement along the trail from damaged and wounded to strong and whole.   Both journeys—the external and the inner one—are incredible feats of fortitude, effort, pain, and authenticity.  I certainly felt that I had traveled with her, so intimately does she let us into her life and self.  Her voice is so authentic and so at her service, her technical skills so highly developed, the pacing and structure so skillful, her persona so honest and appealing, the memoir is a joy to read.  It’s also a great model for memoir writers in how it weaves the forward action story with relevant, resonant passages of back story that give weight and meaning to that forward action.

It was four years after her mother’s death that Cheryl hiked the PCT.  The idea had come to her almost randomly, it seemed, in the midst of her own downward spiral, into sex and heroin.  She describes her experience with heroin:

“It was good. It was like something inordinately beautiful and out of this world. Like I’d found an actual planet that I didn’t know had been there all along. Planet Heroin. The place where there was no pain, where it was unfortunate but essentially okay that my mother was dead and my biological father was not in my life and my family had collapsed and I couldn’t manage to stay married to the man I loved.

“At least that’s how it felt while I was high.

“In the mornings, my pain was magnified by about a thousand. In the morning there weren’t only those sad facts about my life. Now there was also the additional fact that I was a pile of shit.”

It is in the midst of this crack-up that she decides she has to walk the PCT alone. On the hike she understands the connection: 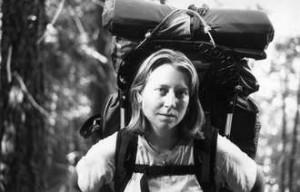 Young Cheryl on the trail

“I stopped in my tracks when that thought came into my mind, that hiking the PCT was the hardest thing I’d ever done. Immediately, I amended the thought. Watching my mother die and having to live without her, that was the hardest thing I’d ever done. Leaving Paul and destroying our marriage and life as I knew it for the simple and inexplicable reason that I felt I had to—that had been hard as well. But hiking the PCT was hard in a different way. In a way that made the other hardest things the tiniest bit less hard. It was strange but true. And perhaps I’d known it in some way from the very beginning. Perhaps the impulse to purchase the PCT guidebook months before had been a primal grab for a cure, for the thread of my life that had been severed.”

A profound moment comes late in the book, after she’s had some great sex with a stranger in Ashland on a stop-over, and goes to the beach with him for the day.  By this point, we know her very well–what has hurt her, what she has struggled with, her mistakes and regrets, her strengths and what she has borne to get to this point on the hike and in her life.  She walks off by herself and writes her ex-husband’s name in the sand:

“I’d done that so many times before. I’d done it for years—every time I visited a beach after I fell in love with Paul when I was nineteen, whether we were together or not. But as I wrote his name now, I knew I was doing it for the last time. I didn’t want to hurt for him anymore, to wonder whether in leaving him I’d made a mistake, to torment myself with all the ways I’d wronged him. What if I forgave myself? I thought. What if I forgave myself even though I’d done something I shouldn’t have? What if I was a liar and a cheat and there was no excuse for what I’d done other than because it was what I wanted and needed to do? What if I was sorry, but if I could go back in time I wouldn’t do anything differently than I had done? What if I’d actually wanted to fuck every one of those men? What if heroin taught me something? What if yes was the right answer instead of no? What if what made me do all those things everyone thought I shouldn’t have done was what also had got me here? What if I was never redeemed? What if I already was?”

Reading that passage, I felt as if I were witnessing a woman arriving at her deepest and best truth.  It was stirring and moving to me in a way I can’t describe.  The letting go, the owning up, the honesty, the acceptance and understanding of her very self.  What if I was never redeemed?  What if I already was?  The great accomplishment of the memoir is its hard-earned truth, and I believe that’s ultimately why readers are responding to it as they are.

During the hike, Cheryl has books sent to her in her supply boxes at various points along the trail.  She burns the books as she reads them, to save weight.

“When The Ten Thousand Things had turned to ash, I pulled out the other book in my ziplock bag. It was The Dream of a Common Language. I’d carried it all this way, though I hadn’t opened it since that first night on the trail. I hadn’t needed to. I knew what it said. Its lines had run all summer through the mix-tape radio station in my head, fragments from various poems or sometimes the title of the book itself, which was also a line from a poem: the dream of a common language. I opened the book and paged through it, leaning forward so I could see the words by the firelight. I read a line or two from a dozen or so of the poems, each of them so familiar they gave me a strange sort of comfort. I’d chanted those lines silently through the days while I hiked. Often, I didn’t know exactly what they meant, yet there was another way in which I knew their meaning entirely, as if it were all before me and yet out of my grasp, their meaning like a fish just beneath the surface of the water that I tried to catch with my bare hands—so close and present and belonging to me—until I reached for it and it flashed away.”

I love the way this beautiful passage moves from the actual and factual to something more elusive, the intuitive grasp of meaning which can’t be articulated, but is sensed, felt.

She returns to this metaphor at the end of her journey and the end of the book.  In a flash forward, she recounts from the present what the future would bring to her: a loving marriage, two adored and adoring children, a return fifteen years later with her husband and children to this very spot where she finished her long walk:

“And how it would be only then that the meaning of my hike would unfold inside of me, the secret I’d always told myself finally revealed…

“It was all unknown to me then, as I sat on that white bench on the day I finished my hike. Everything except the fact that I didn’t have to know. That it was enough to trust that what I’d done was true. To understand its meaning without yet being able to say precisely what it was, like all those lines from The Dream of a Common Language that had run through my nights and days. To believe that I didn’t need to reach with my bare hands anymore. To know that seeing the fish beneath the surface of the water was enough. That it was everything. It was my life—like all lives, mysterious and irrevocable and sacred. So very close, so very present, so very belonging to me.”

It would be seventeen years after she finished the hike before Cheryl Strayed would write and publish Wild.  During those years she would master her craft, understand and distill her experience, and become the writer she was meant to be. 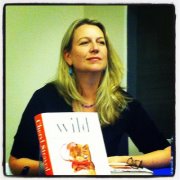