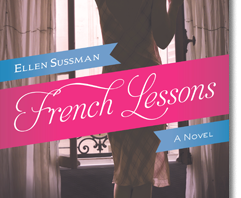 French Lessons in Love and Sex

I’ve just enjoyed what I believe is called a good read.  It was light, sweet, non-demanding and full of sex.  I read it on the way back from NYC, and it made a great airport/airplane novel.  It was also a relief after the weight of We Need to Talk about Kevin.  So I recommend it for your next trip, especially if it’s to Paris.

French Lessons by Ellen Sussman is set in Paris, and is built around three young people, Nico, Phillipe, and Chantal, who are French tutors.  Now let’s see if I have this right: Chantal is sleeping with Phillipe and possibly in love with him; Nico has slept with Chantel once and is definitely in love with her; and Phillipe…hmmm, I can’t remember.  The novel traces the day each tutor spends speaking French with an American client, as well as falling in love and/or having sex.  Did I mention the sex?  The first American client is Josie, a high school French teacher who has lost her married lover to a plane crash and come to Paris because she and her lover were planning their first trip away together there.  Her love affair back in the states with Simon was one of those head over heels obsessions that involved a lot of fabulous sex.  Nico, her tutor, is wonderful, actually asking her questions about herself and even listening to the answers, flirtatious, kind, sensitive, a poet and French.  They play with the idea of running away to Provence together, as Josie traces the backstory of her affair and loss.

The second story belongs to Riley, who has lived in Paris a year, hates it, is in a troubled marriage, and has two young children.  She scores Phillipe as her French tutor, and Phillipe, being Phillipe,  ends up making love to her as apparently only the French can.  All the people in this novel have really great sex.  Everyone is young, good looking, and horny.  The men have no trouble getting it up and the women never get cystitis.   It makes you want to go to Paris and hire a French tutor.  By the end of her French lesson, so to speak, Riley discovers she loves Paris…

I suppose at this point it appears I’m making fun of the novel, but I’m not.  Not really.  Really!  I enjoyed it, sex and all.  It’s really delicious in its way, like a good French pastry.  You wouldn’t want to make a steady diet of it, but it has its appeal.  The writing is lively and I was interested in the characters and their love/sex lives and even though it seemed fantasy-like, over the top, we all need a little pain au chocolat in our lives from time to time.

I was the least taken with the third story, that of Jeremy and Chantal.  Perhaps I was coming down from a sugar high.  Jeremy is married to an older actress (like 45) who appears in a movie scene being filmed on the Pont des Arts, an iron pedestrian bridge that crosses the Seine from the Institute Francais on the Left Bank to the Louvre on the Right Bank.  Each of the stories in the novel ends with the various characters observing the filming of this scene, which provides a running motif of watching and the difference between movies and life (I think). This scene is of a young woman being circled predatorily as she lies naked on a bed by an also naked man, as the actress who is Jeremy’s wife observes the scene (along with hundreds of spectators on the banks).    Jeremy spends his time with his tutor wondering if he really loves his wife, if he could possibly sleep with Chantal, and so on.  Of course the sex he has with his actress wife is the usual amazing stuff and transcends the language barrier, so to speak.

Speaking of language, it provides another running motif, as in not being able to express oneself, in French or otherwise, which is a natural for a novel about being tutored in a foreign lanuage.  This is perhaps beaten into the ground a bit, calling self-conscious attention to itself.  But regardless, it is a pleasure to be in Paris for the course of the novel, and to read about love (and sex).  If you want something transporting and effervescent, there are worse things than French Lessons.