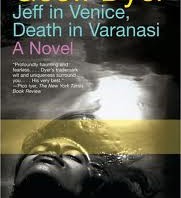 I hardly ever listen to books on tape, which I regret and keep meaning to remedy.  However, knowing I had a four plus hour drive ahead of me to Madeline Island in Northern Wisconsin, I dashed into our small, neighborhood library the day before I was to leave to see if I could get a book on discs.  The pickings were very slim; I almost gave up.  But then I saw Geoff Dyer’s Jeff in Venice, Death in Varanasi.  I remembered vaguely reading a review of it when it came out, which had interested me for reasons long lost to me, other than the fact that I had been to Varanasi.  I had an equally vague sense of Geoff Dyer as a writer I should check out.  I got the CD set and threw it in the back seat.

The next day I started listening, and Reader, for the next four hours going north, I was entertained to the hilt. I could have just kept driving, on up into Canada and straight through to Hudson Bay.  It was with great reluctance that I arrived at the Bayfield ferry and was forced to turn the engine off and leave the world of Dyer’s novel.  I had thought I was in Venice, which I’ve never been to, swept up as I was in the passionate, coke fueled, hot sex fling of two strangers who meet up for a few days at the Biennale, the major contemporary art event that takes place in Venice every two years. What was not to like!  All read in a British accent.  The main character is a Londoner named Jeff Atman, whose clever, quirky consciousness I found irresistible:

A creature of deep habit, Atman was programmed, the moment he set foot on Marylebone High Street, to go to the Patisserie Valerie’s and order a black coffee with a side-order of hot milk and an almond croissant—even though he didn’t want either.  Normally he came here in the mornings but now, in the post-lunch doldrums, it was too late for coffee, too early for tea (it was that time of the day, in fact, when no one wanted anything) and far too late to read the paper—which he’d read extra thoroughly, hours earlier, as a way of putting off writing his stupid think piece.  Fortunately he had a book for company, Mary McCarthy’s Venice Observed.  He’d first read it four years ago, after getting back from the 1999 Biennale, and had started rereading it now—along with the other standard books on Venice—in preparation for the return trip. His almond croissant was the size and complexion of a small roast turkey and in the time it took to chomp through it he was able to read the entire section on Giorgione’s The Tempest.

Dyer is brilliant in capturing this aging, floundering, vulnerable journalist in the most energized, dynamic, funny-sad prose I’ve read (okay, heard) in a long time.  Atman is being sent to the Biennale to interview the wife of a famous artist, and hopefully bring back a drawing the artist made of her. While there he meets an American woman, Laura, whom he finds immensely desirable.  Laura isn’t developed as a character beyond her sex appeal, but I didn’t mind.  Getting to hang out in Venice and experience the Biennale through our jaded, endearing anti-hero’s eyes is entertaining and absorbing enough.  It was also refreshing, at least to me, to see the man be the one whose emotions cross the sex/love barrier, rather than the woman’s.

Here the lovers are about to part ways as Laura is readying to leave Venice, their short interlude in the romantic city over:

Laura came over and kissed him on the mouth. Their arms were around each other. Her hair smelled slightly of city. She didn’t mention the future, when they might meet again, and neither did he.  The reason he didn’t was because she hadn’t.  Did she refrain from doing so because he had said nothing? He couldn’t know for sure but he felt, reasonably or not, that he was taking his cue from her.  A strange, modern form of intimacy—not Victorian at all—that made it easier to lick someone’s ass than to ask when you might see them again. When will I see you again?  The crap pop song, by whichever crap group it was, started going around and round in his head, his empty, thought-crammed, empty head.

As much as I enjoyed Jeff in Venice, the first half of the novel, it was the second half, Death in Varanasi, that truly amazed me.  Driving south on 35W through the empty Minnesota landscape on my return trip a week later, I was in Varanasi again, which I had visited in 2006, only this time I was taking it in through Dyer’s incredible ability to describe and capture that mind-blowing place.  In some ways it was better than seeing it in person, in that language allows you to see and experience more fully sometimes than your own senses.  I was hoping to pick up with Jeff and Laura after they went their separate post-Venice ways, but she doesn’t appear again.  Instead, now we have a first-person narrator who may or may not be the Jeff Atman of Venice.  Like Jeff, he’s a journalist, on assignment to write a short travel piece about Varanasi.  But drawn deeper and deeper into the city, the narrator checks out of the Taj hotel where he’s been staying, and into the Ganges View, where he takes up residence, with no plans to return to London, which holds nothing for him.  He wanders the ghats, sees the burning bodies, takes boat rides on the Ganges, meets other travelers who come and go, visits Hindu temples where he tries to make sense of the gods, and sees strange, incomprehensible sights such as a man pushing his enormous testicles in a wheelbarrow–all par for the course in Varanasi—all rendered with the most acute observations both external and internal.  The writing is as rich, vivid, light, dark, profound, spiritual, profane, and layered as Varanasi itself.  Life and death in Varanasi are beyond our understanding, too complex, other, ancient, intense, enigmatic and mind-boggling for a Westerner to grasp.  And that’s what’s so brilliant about Dyer’s Varanasi.  He captures it in all its elements, from all angles, from the trash heaps “compacted down into a dark tar, a sediment of concentrated filth, pure filth, filth with no impurities, devoid of everything that was not filth,” to the Hindu gods who are always getting themselves into jams but “since their powers were unlimited, the jams in which they found themselves could never generate much suspense,” to dogs eating a human body on the river bank, to listening to Indian music in which “I began to lose myself in the infinitude of something I could not recognize or understand.”

Perhaps the following passage in which the narrator encounters a cow in a lane will give you a taste (!) of his lively, adroit mind as he experiences and reflects on whatever comes his way:

A few yards from the temple I came to an intersection.  The way ahead was temporarily blocked by a cow swaying down the lane that crossed the one I was on.  Our eyes—one of its, two of mine—met.  On its part there was no sign of comprehension, no evidence that my existence even registered.  Well, fine.  The cow was in its cattle-trance and I was in my state of eager receptivity to everything that was going on around me, but there was room, even in this narrow lane, for all God’s children, be they man or beast.  The cow lumbered on.  Its shit-caked tail was as drenched in shit as an artist’s brush in paint.  But just because I was me with a nice clean bottom and she was a cow with an ass caked in shit did not mean that I had not been her—or she me—in a previous existence.  We could trade places in an instant.  The value of your shares in the great Samsara-NASDAQ can go up as well as down.  Still, all in all, a cow was a pretty odd thing to revere. . .  As I passed behind it, the cow flicked its tail, swatting me in the face with its tail, with its shit-drenched tail. There was a sharp intake of breath—mine—as my mouth opened in shock.  I sort of shrieked.

Needless to say, this unfortunate incident leads to a horrible bout of sickness, from which the protagonist never quite recovers.  He moves further and further away from his “previous incarnation” in London and deeper into relinquishing the self he once knew, losing weight, smoking bhang, shaving his head, growing a big, scraggly beard, taking to wearing nothing but a dhoti as he wanders the streets:

Some people stop believing that happiness is going to come their way.  On the brink of becoming one of them, I began to accept that it was my destiny to be unhappy.  In the normal course of things I would have made some accommodation with this, would have set up camp as a permanently unhappy person.  But what had happened in Varanasi was that something was taken out of the equation so that there was nothing for unhappiness to fasten itself upon.  That something was me.  I had cheated destiny.  Actually, the passive construction is more accurate: destiny had been cheated.

By the end he is either mad—or enlightened.

Whatever connections Dyer intends to draw between Venice and Varanasi are oblique at best—maybe the self as experienced through desire and longing in Venice, the self in spiritual abandonment in Varanasi?  I’m not sure.

What I do know is that Dyer is a riveting, original writer.  Jeff in Venice, Death in Varanasi was a dazzling trip I’m glad I took, going north and south, West and East.