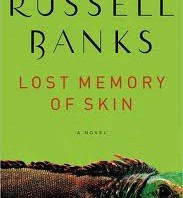 What an evocative and enigmatic title Lost Memory of Skin is.  It may have been what drew me to the book originally, before I knew what it was about, along with wanting to read another novel by Russell Banks, a writer I admire tremendously. Lost Memory turns out to be an ambitious, thoughtful, morally complex and deeply compassionate novel, and while it doesn’t always succeed, it’s an amazing accomplishment. I’m glad I read it, even though it was painful.

It has one of the most fascinating and poignant characterizations I’ve read.  The Kid, a twenty-two year old convicted sex offender who has never kissed a girl, is seared in my memory.

The descriptions of his childhood are particularly poignant. It would be too simplistic to label him “neglected,” though he certainly was.  The Kid was raised by a woman who “needs men to want her but she doesn’t want men to need her.  In fact she doesn’t want anyone to need her—not even the Kid although she does not know that and would deny it if asked.  She believes that she loves her son and has done everything for him that a single parent could and has sacrificed much of her youth for him and therefore cannot be blamed for the way he’s turned out.”

The crimes of the other men living under the causeway are not specified.  Banks does not treat them sentimentally but he does shine a light on one of the darkest aspects of society, how we treat convicted sex offenders, whose crimes can range from the most heinous to someone like the Kid, who was busted for having sex (or in the Kid’s case, trying to) with an underage girl. All under one umbrella, or I should say causeway.

The Kid is basically under the spell of pornographic virtual reality when he “meets” brandi18.  Banks captures perfectly the tentative flirtation and seduction that goes on online between the Kid and her, which leads to his terrible downfall.  Contemplating meeting her, the Kid reflects “He’d be dealing with reality this time.  Not illusion.  He’d be watching and actually touching a real female human being’s body, skin, breasts, legs, ass, vagina, instead of just pictures made from electronic pixels whose colors and movement and arrangement on a screen were predetermined and controlled by a script and a director and a half-dozen camera angles.  That’s what frightened him.  That’s why his hands were trembling as he lighted another cigarette.  He was about to bump up against and break through an invisible membrane between the perfectly controlled world locked inside his head and the endlessly overflowing unpredictable, dangerous world outside.” It’s as if his body retains the lost memory of skin, real skin, another human being, something he has never experienced, flesh and blood sex as opposed to virtual, and all it can signify, including human connection.

The Kid is a great literary anti-hero.  Over the course of the novel he inches his way towards greater self-understanding, selfhood and forgiveness.  Towards the end of the novel, he reflects on the night he was arrested for soliciting sex from a minor via the Internet, and “how as a result he went from feeling like a dust bunny to a flattened image of a man seen on a computer screen.”  He begins to wonder for the first time if there is a way for him to gain a third dimension “and become wholly alive.”

He figures if he just acts like he has a third dimension, maybe he’ll turn into a third dimensional man.  “Isn’t that how everyone does it? By acting?”  He doesn’t know how to do this, but he knows “It has to be done mentally from the inside out…it can’t be just an act put on for the cameras and the Internet as if life were a gigantic reality TV show that you can download onto your computer or your phone…No, it has to start way inside you down in the black hole of antimatter that sits at the exact center of who you are.”  The Kid with a lot of help from Banks is a philosopher and social commentator of the first order.

I suppose I have to mention the Professor, who is another major character in the book.  He seemed more an intellectual, artificial construct to me than a living, breathing person like the Kid. He’s a huge—and I mean that literally, since he’s described as grossly overweight—part of the novel.  He’s a brilliant sociology professor who befriends the Kid and wants to study him, perhaps to devise a way of dealing with sex offenders and the problem of their homelessness.  He’s necessary for the novel, because Banks can’t just have the Kid in isolation and the Professor provides a plot, but he failed to capture my imagination.  He’s a complicated, mysterious, and ambiguous character who may or may not have been involved in espionage or a shady sexual past. But, alas, I didn’t really care.

I felt the novel had its share of implausible plot terms, most notably towards the end when the Kid meets a kind couple who befriend him (Dolores you will remember from The Sweet Hereafter, popping up in the Great Panzacola Swamp!) and a writer who happens along at a fortuitous moment. It felt to me as if Banks was about to go a little soft on us with the couple, but he pulls back from what could have been a feel good ending.  I posted some thoughts of John Braine’s (Nov. 9, 2010) about implausibility and the Point of Improbability, in which Braine said basically if you’re telling a story, at some point something will happen that couldn’t possibly happen in real life.  If you get rid of it and substitute a credible happening, the Point of Improbability will just pop up somewhere else in the novel.  So given what Banks has achieved in Lost Memory of Skin, I don’t want to quibble about a few plot stretches.

Reading Lost Memory, I was reminded of how much is required to accomplish a big, full-blown, complex, thought-provoking, ambitious novel.  If Banks doesn’t always succeed, there is so much here—so, so much—that the rewards far outweigh any shortcomings.