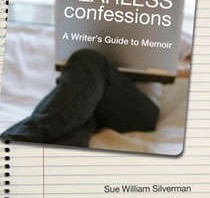 I just came upon a new (to me) book on memoir writing which I want to recommend: Fearless Confessions: a Writer’s Guide to Memoir, by Sue William Silverman ((http://www.suewilliamsilverman.com/index.htm).  I learned things from it and will use some of her ideas and language in the memoir workshop I’m teaching in Key West in January.   She also has the most amazing bibliography of creative non-fiction books on her website http://www.suewilliamsilverman.com/click_here_to_see_sue_silverman_s_list_of_contemporary_literary_nonfiction__71566.htm

I thought I had read all the books on the craft of memoir, but nooooo. Lately I’ve sort of read two other (to me) new ones: The Memoir Project, by Marion Roach Smith, and Shimmering Images: A Handy Little Guide to Writing Memoir, by Lisa Dale Norton.  Of these three, I liked Fearless Confessions the best, but I can’t really do justice or say anything particularly helpful about the other two since it’s been a while since I sort of read them.  You can check them out.  I still like the “classic” Writing the Memoir by Judith Barrington, and also Living to Tell the Tale, by Jane Taylor McDonnell.  I have a memoir writing bibliography under “articles,” and it definitely needs updating.  Let me know if you recommend other guides to writing memoir that I should include.

Sue William Silverman has written two memoirs, Because I Remember Terror, Father, I Remember You, which received the AWP Award in Creative Nonfiction, and Love Sick: One Woman’s Journey through Sexual Addiction.”  I haven’t read either.  She says in the Preface that she initially conceived of her memoir guide “as a way to redeem the notion of ‘confessing’ for silenced women.”  I didn’t realize that anyone felt silenced anymore.  But I’m sure Silverman knows more about feeling silenced and writing about taboo subjects than I do.  She draws on her own experiences of writing about incest and sexual addiction to inform her guide.  I want to make clear that you don’t have to have such painful material to gain from Fearless Confessions.  She personalizes the material so that you feel she’s speaking directly to you, she uses faux-memoirs at times to illustrate points, has writing exercises, and includes examples of others’ essays to round things out.  You may not use all her ideas, but I think you’ll definitely find things here that are useful to you as a memoir writer.

One of the concepts that I particularly liked was her discussion of the Voice of Innocence and the Voice of Experience.  People who write and teach memoir always grapple with the distinction between the experiential voice and the reflective voice.  Her discussion of these two voices made me think of Vivian Gornick’s concept of situation and story, (see my July 24th, 2011 post).  Silverman says the Voice of Innocence is “much like the horizontal plot line: it’s the voice that tells the story of what happened, the events.”  Gornick refers to this as the “situation.”  The Voice of Experience is like “a vertical plot line: it’s the voice that interprets or reflects upon the events.”  Gornick talks about “story,” which is what the writer is emotionally concerned with.  The ideas are related, if not identical.  “Story” in Gornick’s sense, it seems to me, is similar to the Voice of Experience, in that that voice understands what the essay or memoir is about and attempts to find meaning in it.  The Voice of Innocence speaks from the moment of experience, with facts and sensory details, while the Voice of Experience “examines what the author, sitting at her desk writing, understands about events now.”

Silverman cites this example of both voices from her memoir Love Sick, describing a scarf her married lover gave her:

“I press the scarf against my nose and mouth.  I take a deep breath.  The scent is of him—leaves smoldering in autumn dusk—and I believe it is a scent I have always craved, one I will always want.  I don’t understand why the scent of the scarf…seems more knowable, more tangible than the rest of him.”

Memoirs vary greatly in how much reflection they have.  Some, like This Boy’s Life, read like novels, with very little Voice of Experience or “story” in Gornick’s sense.  They communicate mainly through the fictional devices of characterization, details, scenes, plot, and often narrative arc, letting the reader experience the story and interpret it in much the same way we do fiction.  Other memoirs rely heavily on Silverman’s Voice of Experience or reflection: Here, for example, is Gail Caldwell a few pages into Let’s Take the Long Way Home (Sept. 9th post):

“Before one enters the spectrum of sorrow, which changes even the color of trees, there is a blind and daringly wrong assumption that probably allows us to blunder through the days.  There is a way one thinks that the show will never end—or that loss, when it comes, will be toward the end of the road, not in its middle.”  In the memoir she is interested in the special friendship between herself and Caroline Knapp and Caroline’s early death.  But she is just as interested, if not more so, in reflecting on her own experience of loss and grief after her friend’s death.  She sounds this theme—or story, in Gornick’s sense–very early on, as we see above, employing the Voice of Experience.

There isn’t one correct way to use or intertwine these two voices (or however you want to think of them).   It’s a matter of finding the voice that will allow you to tell the story you want to tell.  I think the best way to sort this out is to consider that you’re always writing from your most present and mature perspective: the now of you as you look back and recount the past.  Your Voice of Experience, even if you start out very experientially, very scenically, very “innocently.”  As readers we assume this current, mature view; we expect it.  It’s that voice, your present voice from the here and now, that allows for perspective and wisdom (we hope) or at least some reflection in the form of musing, questioning, probing, wondering, speculation, analyzing.  But it’s the Voice of Innocence in moments and scenes that brings the story to life.  The best memoirs intertwine these two voices seamlessly, so that you never even identify them as separate.

But the act of writing will eventually lead you to the right voice.  Because it’s there, inside you, waiting to be heard.