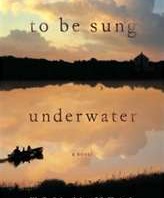 My Love Affair with to be sung underwater

I fell in love with Tom McNeal’s To Be Sung Underwater from the first few paragraphs of the first chapter—and if ever there was a novel for which falling in love is the appropriate reaction, this is it, because it’s so totally about falling in love (and getting stuck there—but more on that later).

Those first sentences were the literary equivalent for me of meeting a tall, dark stranger.  I fell in love at first sight with the voice (to mix metaphors) of the novel.  The authoritative, omniscient narrator took such powerful, confident command of the story that it freed the reader in me to give myself completely to it.  I was in over my head before I knew it.  The language and density of the prose, the encapsulation of what was to come, the themes announced and the situation introduced in these three brief paragraphs–all produced a feeling of excitement and joy in me.  I couldn’t wait to devour the whole thing.

Here is the opening section of the first chapter:

“The swerve (to use Judith’s own term) that slipped her outside the customary course of her life derived from one of those off-hand moments in which odd circumstances and amplified emotions invite an odd and overcolored response. Amusement was the presumed objective, whatever the actual result might be.

‘It was strange,’ she said when she spoke of it, which was only once, and much later, to her friend Lucy Meynke.  ‘My life had utterly settled into itself and then this little…swerve occurred, or maybe I meant it to occur, maybe I’d actually plotted it out in one of those corners of your brain or heart you access only in dreams.’ She gave Lucy Meynke a look of actual bafflement. ‘I really don’t know.’

At the time, though, it seemed simple.  Judith was renting a storage garage for some old furniture and when, late in the transaction, she was asked her name, she gave one that was not her own, a name that in fact she hadn’t thought of in years.  A few hours later, Judith, who was not a loser of keys, lost a key.”

How I admire this opening: how loaded it is, how it stays a few steps ahead of the reader, how knowing it is.  All will be revealed, but in the author’s own good time.  I was intrigued, and already smitten.  And I wasn’t disappointed as I read on.

The present frame of the story is Judith discovering that her husband of twenty-five years is possibly having an affair.  She’s not sure, but in a way it doesn’t matter, because Judith has a secret herself.  Despite having married a good man who loves her, having a smart, socially capable daughter (with whom she doesn’t get along) and a successful career as a film editor in LA, Judith, at forty-four, comes to realize she’s never really gotten over the love she had with Willy, her first lover when she was eighteen and he twenty-four, in the small Nebraska town where she had gone to live with her father after her parents separated.  It turns out that Judith, who has carefully planned and controlled her life and done all the right things, now swerves off the predictable path, spending more and more time in the storage garage with the furnishings that comprised her girlhood bedroom back in Nebraska, and hiring a private detective to hunt down Willy, whom she abandoned when she left for college and the wider world, twenty-seven years ago.

Inside this present frame unfolds the past story of Judith’s teenage years in Rufus Sage, Nebraska, with her father, a literature professor at the local college who has lost his chance at tenure at a more prestigious college because of an affair, and who guides Judith with a light, enigmatic hand.  It is during the summer before college that Judith falls in love with Willy, whom she briefly encountered when she was fifteen, and who got under her skin by calling her dangerous, but who “didn’t otherwise occupy another moment of her thoughts until one morning a week or so later, when she awakened from an exotic dream with the odd sensation of having seen his pale gray-blue eyes staring down at her, watching her sleep.”  Later, before they’ve even gone out, when she’s just given him her telephone number at a café, “Odd sensations were moving through Judith, sensations she both feared and couldn’t get enough of, so that when Willy Blunt suddenly stood up [to leave], it seemed to her that something she’d been waiting for a long time, if not her whole life, having at last been delivered, was now being snatched away.”

I sometimes wondered if the author, Tom McNeal, had been a girl in a former life. Because he knows what girls want!  Willy!  Willy Blunt of the pale gray-blue eyes, Willy of the gentle flirting and teasing, easy going, laughing Willy the carpenter who can build a room and take it down, Willy who answers when Judith asks him what onomatopoeia is “Squish.  Slurp.  Zip.” and then gives the smallest waggle of his eyebrows when he says he isn’t sure about unzip, Willy who finds Judith smarter and prettier than all his past girlfriends put together, Willy who loves her with a strong, pure love that is undiluted by doubts or fears.  Throw in old jeans, a white T-shirt, and a red Chevrolet pick-up truck for which a tightened pair of vise grips serves as the interior handle on the driver’s side door, and you pretty much have the perfect package.  Judith finds with Willy “the kind of love that…picks you up in Akron, Ohio, and sets you down in Rio de Janeiro.”

They have a passionate, idyllic, and in one instance, terrifying, summer of love, and then Judith makes the decision to go away to college, rather than staying close to home and to Willy.  Soon the more cosmopolitan world of university causes her to leave Willy behind.  It takes twenty-seven years for them to come together again, and when they do, it is still love, though of a different sort, but a complete love nevertheless.  They were once people who loved one another, and they still are.  Because they were young, you can call it puppy love, infatuation, a crush, but it was love of a depth and quality that neither would experience again.

“No, no, Willy, what you’re saying about me—that’s just not true,” she said, but she didn’t say what she thought was the truer, darker truth: that, to use his metaphor, he had been most of the book, but she had been too careless or self-absorbed or oblivious to know it, and it was too late to change the ending.”

Or maybe she had been merely young.  It was probably inevitable that she would move on, out, away.  He remained behind, and here’s the stuck part: for the next almost three decades of his life, he couldn’t get over her.  He went on with life, as she did, but his hurt and pain did destructive things to him.

As I pondered the story and characters, I wondered if it is good to romanticize the kind of love Judith and Willy had, as the novel seems to do. The novel did seem to me intensely romantic. I even wondered how it would be received if a “girl” had written it–such a sentimental, and as the dust jacket describes it,  “heartbreaking love story of a woman trying—almost too late—to remember, and the man who could never forget.” That’s almost embarrassing…like those romances you see near the checkout counter at Barnes and Noble, Passion Unleashed. Love Unbound.  Then I thought of Jonathan Franzen’s Freedom, which also involved a youthful crush that lasted and was acted on in middle-age.  If there’s one thing Franzen is not, it’s sentimental.  To Be Sung… is a more limited book, a more romantic book, unabashedly so, and I don’t mind… because it’s also a literary book: the writing is wonderful, the characters fully real, the plot artfully constructed, Rufus Sage beautifully rendered, and the emotions—well, they seemed to me not artificially trumped up but true to the ungovernable human heart.